"At times it would be like 'should I move to another country?'": Blessing Okagbare Speaks on Team Nigeria's #Rio2016 Preparation & Performance 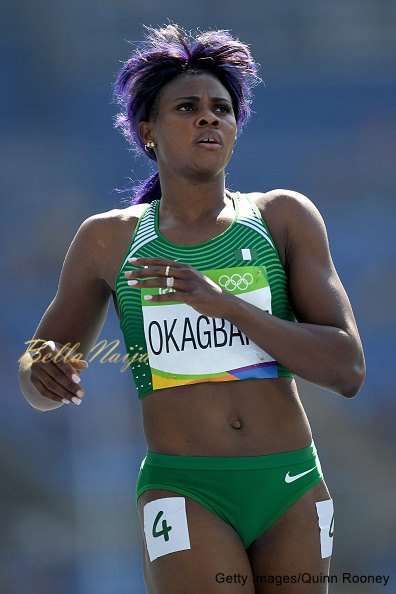 One of Nigeria’s foremost sprinters, Blessing Okagbare has disclosed that sometimes she contemplated running for another country due to the unfavourable conditions in Nigeria.

She made this known in an interview with PUNCH’s Pius Ayinor.

Okagbare said that the London Olympics was by far better that the just concluded Rio Olympics, lamenting the fact that there was no support for athletes.

It didn’t feel like an Olympic for me but not because I didn’t win a medal. This is my third Olympics and I have been to Olympics that everything was so cheerful and the athletes were very happy. But for this Rio, I don’t know about other people in Team Nigeria as I’m speaking for myself, the morale was just low. Some of the girls come to me and we talk. Some times when they say these things (about how bad they feel), I just feel like these people feel the same way I feel. Everything about Rio was just low. This is the worst Olympics we’ve had.

Was it about the preparations?

Prior to coming here was bad, I don’t understand what they wanted us to do in Rio. At times you go to other countries, mix with the athletes and you see a people getting quality support. But it’s not so with the Nigerian contingent. It comes to a point where you just try to do everything for the sake of your passion as well as for your fans.

Talking about medals I was watching you before the Rio 100m race. I saw you bending for a long time, were you reluctant to run?

No, I wasn’t reluctant to run, I was ready and I felt like I was in the best shape of my life coming here (Rio Olympics). It still surprises me (how things turned out). I posted something on Facebook that there are certain things that don’t make sense, there are things that you just don’t understand.

Like this competition, I put in my commitment despite having good reasons to stay away. I had some injuries but I worked so hard to come in here (Rio), and when the competition started it was just different; it was just like I wasn’t in it.

Did your injuries and mindset affect your general performance?

I don’t know, I was still trying my best, but you don’t force it. You just get in line and run, because you’ve been doing that training already. I can’t explain it, so let’s leave it there. When you go to a major championship, you don’t think too long. You don’t have that time.

I was in London too, we didn’t win anything but the athletes looked more determined than in Rio…

I went to Beijing when I was 19. I was so young and naive. Beijing was one of the best Olympics for us; we had entitlements, encouragement and all. They supported us and we were quite encouraged. But in Rio it’s like all they just wanted was for you to show your face and leave. I don’t know but it’s as if they didn’t want us to come here. Last time I heard the minister say a gold medal winner would get $2000 and I asked ‘is that what a gold medal is worth?’ And before I knew, it was actually in the media. You don’t bring that kind of stuff to athletes in the name of encouragement because we know what other athletes from other countries get. It’s been a problem and every year, I wish things would be different. At times it would be like ‘should I move to another country?’ But you may understand why I refused to change. It’s my career and my passion so I enjoy it and that is what drives me. And that’s why I am still on the track and for Nigeria.

Related Topics:#Rio2016Blessing Okagbare
Up Next

She Leads Africa: 5 Tips For Keeping Your Business Afloat