How Twitter Reacted to the Features of iPhone 7 & iPhone 7 + 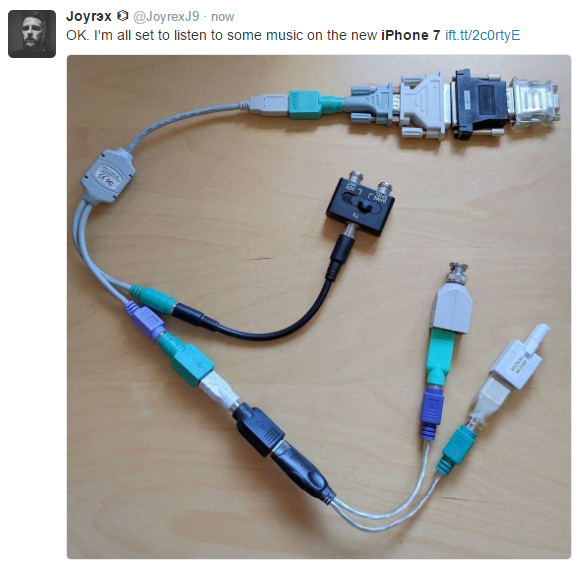 Following the release of the iPhone 7 and 7 + yesterday, social media went agog, particularly because of the new specifications… and price.

In Apple’s latest release, the phone will not come with an audio jack!

So, you probably have to use Wifi/Bluetooth headphones, Lightning Earpods which connects through the charging port, or get a device that connects the earphone cable (as well as the charger) on one end, and then connect to the power adapter on the other end.

Here are some tweets, to show you how people felt after the announcement.

Apple: We have removed the Audio jack on the upcoming iPhone 7

“The iPhone 7 with its bizarre headphone jack is weaponized for profit and mass customer torture” https://t.co/38XM4ix3JZ @jasperhamill

When they pass you the aux but you have an iPhone 7. pic.twitter.com/oyhBCgvD4e

iPhone 7 is water resistant so your tears can flow over it when you lose the RM700 wireless earphones.

No jack plug on the #iPhone 7? Well, I’m afraid that means no iPhone 7 for every skater who need to plug their music to the ice rink! ?

when you bout to pass the aux but the homie has an iphone 7 pic.twitter.com/rgOj3Sb1BO

Iphone 7 is now out and you are wondering if you really need 2 kidneys pic.twitter.com/7zDTxhf74P

Apple just gave us excuses not to buy the iPhone 7:

– Air pods without the phone-saving wires.
– No headphone/aux cord jack.
– No money.

iPhone 7 for £800? Airplane mode better take me to Sydney

Terrify and enrage all the iPhone 7 owners you know with this one weird trick! pic.twitter.com/4jolVyiI2Y

Just in case you plan on selling an organ to buy an iPhone 7 🙂 🙂 🙂 pic.twitter.com/sxsyb94crW

OK. I’m all set to listen to some music on the new iPhone 7 https://t.co/hOs0NHkosv pic.twitter.com/OdKPeGsZ2I

Iphone 7 released and everyone loses their minds and kidneys!

This is Iphone 7 ? and my wallet ? pic.twitter.com/YxFagD2psS

The iPhone 7 is water-resistant, has stereo sound and a better camera but it doesn’t have that one feature that I want: affordability.

#iPhone7 better come with a find my headphones app

When you people are talking about IPhone 7 and I can’t contribute because I’ve never owned an iPhone before pic.twitter.com/ugnwqm43uc

Thinking of how many successful unreturned change to mum before I can buy the iPhone 7 pic.twitter.com/R5WAsDXyCi

I was Never Arrested by Security Agents – Ahmad Salkida

Introducing *966# Fridays by Zenith Bank – Triple Free Airtime for you