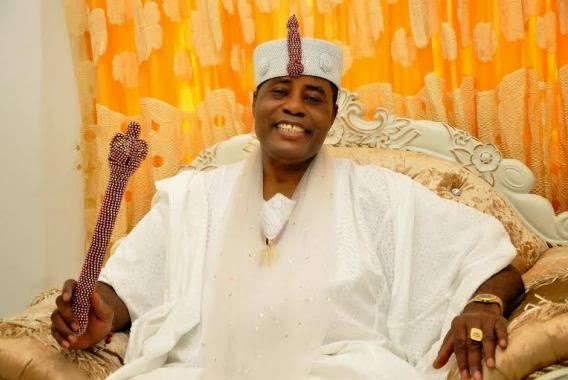 The Olugbo of Ugbo Kingdom, Oba Obateru Akinruntan speaks to PUNCH’s Ademola Olonilua, in this interview about the history of the Yoruba race and why his people do not marry fair complexioned ladies.

The monarch who is the Founder of OBAT Oil & Petroleum Ltd., and is regarded as the richest monarch in Nigeria and second richest in Africa, also said that the Ugbo Stool is the oldest in Yorubaland.

Recently, you published an excerpt of your book referring to the Ugbo stool as the oldest in Yorubaland. This claim appears to be in contrast with the history of Yorubaland, can you shed some light on your claim?

If you read some of the articles which I wrote, I said it without any contradiction that I am the owner of the Yoruba nation. They claim that Oduduwa is the progenitor of the Yoruba race, yet he met my great-great grandfather, Oba Makin Osangangan, the son of Oraife in Ife. If you go to Ife today, they would testify to it because a lot of books have been written and they acknowledge this fact.

A son of Ife, Dr. Moses Ajetunmobi, also wrote that when Oduduwa arrived at Ife, he met 13 communities and that Oduduwa came from Mecca. I was invited during the launching of the book and the late Oba Sijuwade wrote the dedication to the book. The late Oba wrote that he agreed with the findings of the erudite author. Also, the late Oba of Benin, a nice and brilliant monarch who I respected so much said in his book that the only Oba he respected in the South West is the Oba Olugbo of Ugbo, who resides in Ilaje and is the owner of Ife. If we are talking about the history of this country, the man was very rich, eloquent and brilliant. He knew a lot of things about this country. I remember some years back when I was with the Alaafin of Oyo, Oba Lamidi Adeyemi, and he said to me, ‘Olugbo your father is the owner of Ile Ife’.

I have about 2000 authorities I can quote over this subject because I travel far and wide to study. I went to Portugal, Germany and I also visited the national archives in London. These are the places you can get our book; you cannot get any book here in Nigeria because most of our books have been distorted because they don’t want the truth to be known.

What is the place of Ugbo land in the story of Moremi?

Many people must have read about the Moremi episode. The Ugbos raided Ife many times, so they consulted Ifa and Osanyin for a solution. The oracle told them to put a beautiful lady in the market and they put Moremi there who later betrayed the Ugbo people. This is why she is never celebrated in Ugbo. We see her as a betrayer, someone who leaked our secret to Ife. That is another reason why Ugbo people do not marry ladies who are fair in complexion. We see such women as another Moremi.

We believe that she was a traitor and a betrayer. She deceived us and leaked our secret to Ife, otherwise we would have kept invading them till date. There would not have been anybody in Ife if not for Moremi. That is why we can never celebrate her. She betrayed her husband, she was a killer and we can even call her an armed robber. That is why nobody in Ugbo can celebrate her.

But was she not the link between the Ugbo and Ife culture?

We had our sons in Ife, we had about seven quarters in Ife, so we did not rely on her. The two markets in Ife, Oja Ife and Oja Ayegbagun belonged to my great-great grandfathers, Oba Makin Osangangan and Oraife. The Aje of Ife belongs to our house. When you get to Ife, ask for Oke Remo and Ile Ero, you will see our people there. We did not need to rely on Moremi, she is a betrayer.

If your ancestors were at Ife before Oduduwa, at what point did they leave Ife and even began to invade it?

When Oduduwa came, he did not understand Ilaje language and it took him about 16 years before he could understand our language because he came from Mecca. When he arrived at Ife, he met the Oba Makin Osangangan in Ile Ero. It was my ancestor that received Oduduwa in Ile Ife.

The first Yoruba history written by Samuel Johnson in 1889 stated that when Oduduwa arrived in Ife, he was wandering for about three months before he came out of the forest. Oduduwa fought with Obatala and defeated him. We had a lot of warriors that worked for Oba Makin Osangangan and they felt jittery about the man that came from nowhere to defeat Obatala. Our great-great grandfather had to retreat because they had families and a lot of property at Ife. Back then, the only thing the Ife people had was palm wine; that was their only economic power. The Ugbo people decided to retreat because they knew if they fought at Ife, the battle would affect their daughters, wives and children, so they retreated to Oke Mafuragan and they decided to attack Ife from there. Our people raided Ife successfully to the extent that the people of Ife thought our warriors came from heaven.

So what is the place of your kingdom in Yoruba history?

When we were in primary school, they taught us that Oduduwa is Lamurudu’s son. We were also told that Lamurudu came from Mecca, yet Oduduwa is the progenitor of Yoruba race, is that logical? Isn’t his father, Lamurudu supposed to be the progenitor of the Yoruba race and not Oduduwa? There was a lot of controversy surrounding the Yoruba race. Some people felt that an Oba was wealthy so they sided with him to achieve their goals and that was how history was distorted. I remember when I was in primary school, I learnt that about 25 professors were tasked with finding out the history of the Yoruba race and they did a beautiful job gathering information, they wrote the book beautifully and one of the things they wrote was that the Yoruba race belongs to the Ugbo people but the result of the research never saw the light of the day.

If you look at what is happening in the South West, everybody is keeping quiet. We have a lot of sophisticated Obas but if they want to talk, they do so in their rooms or palours because they know I have what it takes to challenge them. I am talking with the authority I brought from overseas because the Portuguese are very rich with information when it comes to the history of the Yoruba. They are the first to come to Yoruba land especially in our area because we are close to the river and we are fishermen. We are the first people to have a treaty in 1884 and the British confirmed it. When we are talking about seniority, you have to acknowledge me.

Don’t you think your claim is contradicting the known history of the Yoruba race?

The Yoruba history has been distorted for a very long time and it would take time before the record can be set straight. I am not trying to re-write the history of the Yoruba race, I am only stating what happened. People have done a lot of bad things by distorting the history of the Yoruba race because of their ambition. This is the time of change for Yoruba race just like President Buhari has brought change to Nigeria. They have been deceiving us for a long time and I want to set the record straight.

But why did you not raise these issues when the late Ooni of Ife, Oba Okunade Sijuwade and the late Oba of Benin, Omo N’Oba Erediauwa were alive?

I remember in 2013, when both kings were still alive, about ten newspapers reported it that I said ‘the Ugbos are the owners of Yorubaland’. Where were they then? They were alive and they read it but nobody contradicted my claims. What else do I want again? These kings were still in existence at the time I first spoke out. They acknowledged it.

But why didn’t your predecessor say this before his demise?

Look at what happened during the time of Jesus Christ; there were Moses, Joshua, John the Baptist, and other prophets before Jesus Christ. These prophets were not called progenitors of Christianity but Jesus Christ came for just 33 years and we proclaim him our saviour. That is exactly what happened; there is time for everything. It is not how far but how well. This is the time to speak out, it is never late.

Are there records backing your claims?

Yes we have a lot of records. The Alaafin of Oyo confirmed it, as it was widely reported. He confirmed it that my great-great grandfather was the owner of Ife. Also in the book of Omo N’Oba Erediauwa; it is there on pages 209 and 210. I said I have about 2,000 authorities on this subject. Before you can confront me, go and read your book well. If you meet me and you are not up to expectation, I would fault you and your kingdom; then your kingdom would fault you because you do not know anything.

What is your relationship with the other monarchs in the Yoruba kingdom?

I have one style; I do not believe in fighting with anybody because the person you fight today could later be your friend and help you in life tomorrow.

What is your relationship with the new Ooni of Ife?

I am not fighting with him. I call him a friend of Ugbo. I am not fighting with anybody. Proving my worth in the Yoruba nation does not mean that I am fighting him, I just want to set the record of Yoruba history straight. If he comes to my house, I will entertain him with whatever I have. That is my attitude towards life because I am a civilised Oba. I regard him as my friend even though I am older than him. I am friends with any Oba in Yoruba land and they are my friends as well.

When would the body of your book be published?

How have you been managing to be a Christian monarch in a community that also practises traditional religion?

It is very simple but you should remember that in those days, there was nothing like Christianity. Our colonial masters were the ones that brought it to Nigeria. What I did when I ascended the throne of my father was to tell my people that I would not abolish the culture they had been practising. I said instead, I would get someone who would be doing it for them. There is no conflict there. If anyone believes in it, then they should carry on but I believe in Christianity. There is no controversy there.

I did all that I was supposed to do but I did not eat the heart of anybody, I was involved in all the necessary sacrifices.