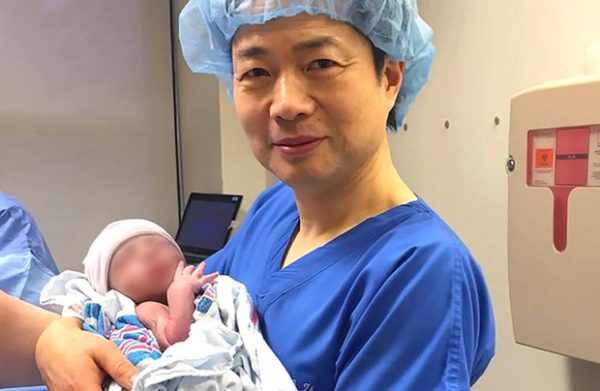 The world’s first child has been born using a revolutionary technique that combines the genes of three parents, DailyMail reports.

Five-month-old Abrahim Hassan’s Jordanian parents, Ibtisam Shaban and Mahmoud Hassan, were treated by a U.S based team in Mexico, using a controversial technique – which has only been legally approved in the UK – that allows parents with rare genetic mutations to have healthy babies.

Shaban carries genes for Leigh syndrome, a rare genetic disorder characterized by the degeneration of the central nervous system; the brain, spinal cord, and optic nerve. Although she is healthy, Shaban’s first two children died because of Leigh syndrome, so she sought out the help of the New Hope Fertility Center in New York.

The traditional way to do this is to use a method known as Pronuclear Transfer, which involves fertilising both the mother’s egg and a donor’s egg with the father’s sperm. When both eggs start dividing into early-stage embryos, scientists remove the nucleus. The nucleus from the donor’s egg is discarded, and the one from the mother is inserted in its place. This is the technique that was legally approved in the UK in 2015.

However, the couple rejected this technique for religious reasons – they didn’t want an embryo to be discarded. Thus, another “three parent” technique, known as Spindle Nuclear Transfer, was used. The nucleus was first removed from the mother’s egg and inserted into a donor’s egg, after removing its own nucleus. Only then was the resulting egg fertilised with the father’s sperm.

Neither method has been approved in the US, so Zhang went to Mexico instead, where he says “there are no rules”. He is adamant that he made the right choice. “To save lives is the ethical thing to do,” he says.

“This is a milestone technique.  It proves for the first time that genetic information from three people can avoid disease. We now know reconstitution of human eggs can produce a healthy baby. No other technique has been established,” Zhang told DailMail.

The team will describe the findings at the American Society for Reproductive Medicine’s Scientific Congress in Salt Lake City in October.

According to New Scientist:

A remaining concern is safety. Last time embryologists tried to create a baby using DNA from three people was in the 1990s, when they injected mitochondrial DNA from a donor into another woman’s egg, along with sperm from her partner. Some of the babies went on to develop genetic disorders, and the technique was banned. The problem may have arisen from the babies having mitochondria from two sources.

When Zhang and his colleagues tested the boy’s mitochondria, they found that less than 1 per cent carry the mutation. Hopefully, this is too low to cause any problems; generally it is thought to take around 18 per cent of mitochondria to be affected before problems start.