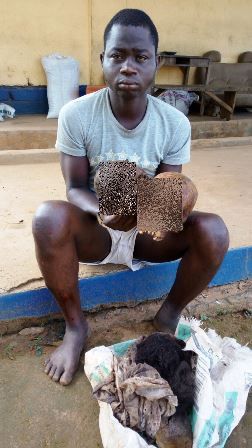 A cemetery attendant, Oluwatosin Akorede has been arrested by the Ogun State Police Command for allegedly being in possession of two human skulls.

Akorede was arrested in the Isale Oko area of Sagamu on Sunday, at about 7PM.

It was gathered that the suspect, who is said to be working in a cemetery along Ayepe Road, Sagamu, might have gotten the skulls by exhuming bodies of dead people.

Reports also stated that the suspect confessed that the items were needed to perform a ritual.

Oyeyemi said that the suspect “is currently undergoing interrogation with a view to unravelling the motive behind his action.”

“The Commissioner of Police, Ahmed Iliyasu has directed that the suspect be transferred to the command headquarters, Eleweran in Abeokuta for further investigation,” Oyeyemi added.