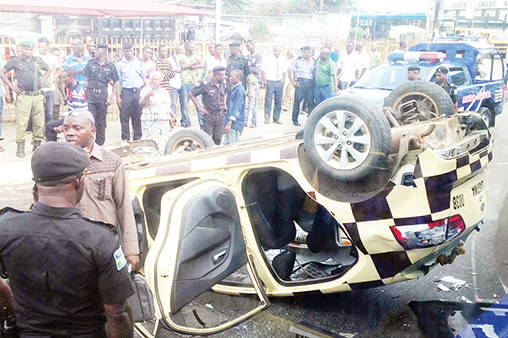 An official of the Lagos State Traffic Management Authority (LASTMA) and a bus driver were reportedly beaten to a pulp at the Costain area of Lagos State after the official allegedly punched the driver for violating a traffic rule, PUNCH reports.

An eyewitness, Ibrahim Adisa, said that the LASTMA official allegedly brought out a ring from his pocket which he used to punch the driver.

The driver reportedly fell to the ground, foaming in the mouth.

Following the driver’s collapse, a mob barricaded the road in protest. They reportedly beat the LASTMA official up. They als vandalised a LASTMA patrol car which drove into the protesters at the time, beating up the officials.

They were said to have mobilised and also attacked the LASTMA office in the area and vandalised vehicles in the yard before the intervention of policemen from the Iponri division.

“We saw that the LASTMA officials held the bus driver at the junction for breaking traffic rule. The man did not release the vehicle to them, which started an argument. The driver and the conductor then started fighting the LASTMA men.

One of the LASTMA officials put his hand in the pocket and brought out a ring which he used to hit the driver. The man fell and started foaming in the mouth.  The officials then took his bus into their yard and left him on the ground.

A mob barricaded the road and vandalised a LASTMA patrol car that came in that time. They beat up all the officials in the car. After that, they carried the man’s body into the LASTMA’s office and chased out the workers,” Adisa said.

The Lagos Police Public Relations Officer, SP Dolapo Badmos, who confirmed the incident, said: “Yes, I can confirm that LASTMA officials impounded a vehicle and the driver and his conductor engaged the LASTMA officials in fisticuffs, which led to two losing consciousness. The two are the driver and a LASTMA official. They were both rushed to the hospital where they are currently recuperating. Investigation has commenced into the matter.”

The statement by the spokesperson for LASTMA, Mahmud Hassan, read:

However, in a bid to circumvent the law and retrieve the vehicle from LASTMA’s yard, the driver mobilised friends and hoodlums, who attacked the Iponri office of the agency. They injured our personnel and damaged vehicles in the yard.

However, when the driver’s action did not yield the desired result, he stripped himself naked and created a scene in order to draw the sympathy of unwary members of the public.

When the act failed, his friends and hoodlums put him in a wheelbarrow with a clear intention to cause commotion and breakdown of law and order.

The statement added that two of the suspects had been arrested and would be arraigned in court.