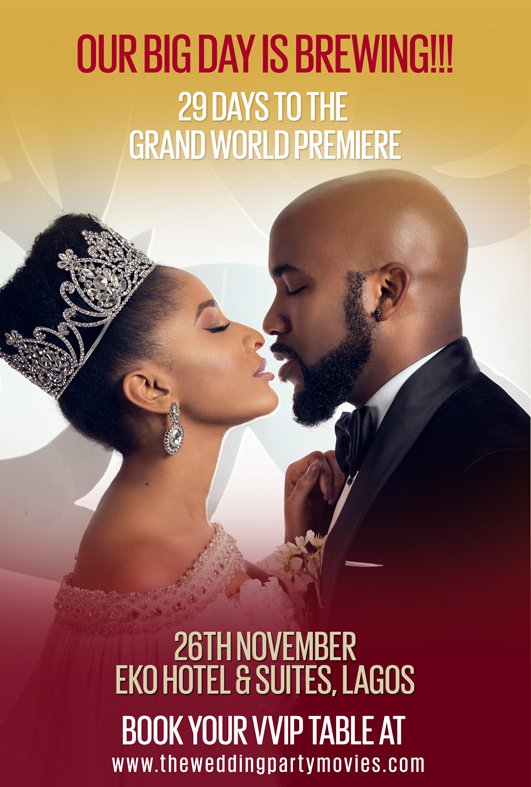 It’s about 29 days and a couple of hours to the Grand premier of what is tagged ‘The Biggest and Most Exclusive Press and Social Event Of 2016’.

Yup, you guessed right, we can only be talking about the Grand world premiere of ‘The Wedding Party’ a romantic-comedy by The ELFIKE Film Collective and directed by the one and only Kemi Adetiba.

Did you know that The Wedding Party is a star-studded movie that stars mega superstar Banky W (in his first movie role ever though you would not believe this because the trailer tells a different story) as Dozie Onwuka, an IT specialist and son of Obianuju and Felix Onwuka played by the delectable Ireti Doyle and swoon inciting Richard Mofe-Damijo. Playing RMD and Ireti Doyle’s son in The Wedding Party, was a feel good experience for Banky because according to him, ‘these are people I watched on the screens for many years, and to star alongside them was definitely an honour and a good way to debut in a movie’

Invites to the grand world premiere of the most talked about movie for 2016 are ready. The star studded event promises to be the press occasion of the year!

‘The Wedding Party’ premiere will take place on the 26th of November at the Eko Hotel and Suites, Victoria Island and promises to take guests on a journey to the rockiest wedding day in Nigeria’s history.

BellaNaija is a Media Partner for “The Wedding Party” Movie