There was jubilation in Ile-Ife on Saturday as the ‎Ooni of Ife, Oba Adeyeye Ogunwusi, appeared to the waiting mammoth crowd with the historic and sacred Aare crown on his head which he wore for the first time since his enthronement late last year.‎

The crown, which is believed to weigh over 70kg spiritually, was always worn once a year by the Ooni, during which major gods in the city are appeased.

The Aare is a special crown made of 151 items, part of which is cutlass and hoe.‎ The crown is worn during the annual Olojo Festival in the ancient city.

The festival, which is a celebration of the creation of the first dawn, the first afternoon and the first night in creation of mankind, witnessed the presence of dignitaries, artists, traditional rulers and government officials.‎

As the Ooni walked out with the Aare crown, thousands of indigenes and non-indigenes of Ile-Ife were praying and hailing the king.

Dressed in all white apparel, Oba Ogunwusi who had been in seclusion for seven days, left his residence for Oke Emese (Emese court) within the palace premises, around 4PM to perform final rites before he wore the mystic Aare crown.

At exactly 5PM, Oba Ogunwusi came out with Are crown on his head and a white dove, praying for the peace and progress of the ancient city and the black race.

He subsequently proceeded amidst prayers and several gunshots to Oke Mogun (Ogun shrine) and Idi Aje two major ports of call during Olojo Festival where rituals and prayers were said for the peace of Nigeria and Yoruba race.

Before Ooni commenced the trip, his traditional emissaries known as Emese, who wore only shorts, wielding coated canes performed the symbolic sprint to Oke Mogun shrine three times to clear the route the monarch would take.

Others are Ayo Olopon traditional game, Yoruba cultural entertainment night, music concert, Omodon (Sisi) Olojo Cultural pageant, and fashion show.‎ The festival will end on Monday with the grand finale Royal outing when the Ooni is expected to move round the town visiting some specific places especially his ancestral Giesi compound at Agbedegbe.

The festival was peaceful, as all and sundry were in celebration mood, praying for the progress and development of the Yoruba race and the country at large. 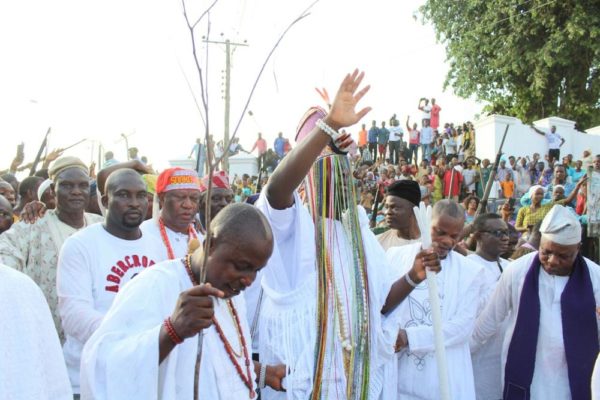 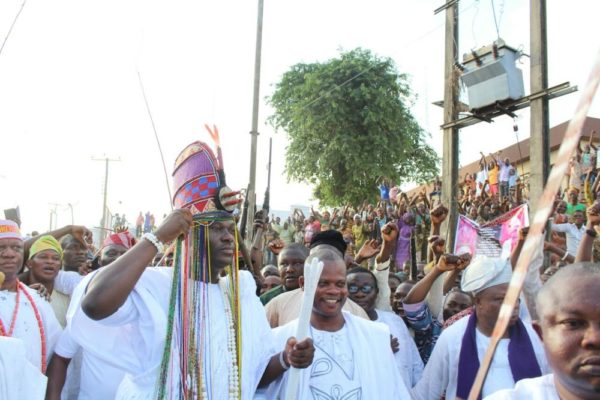 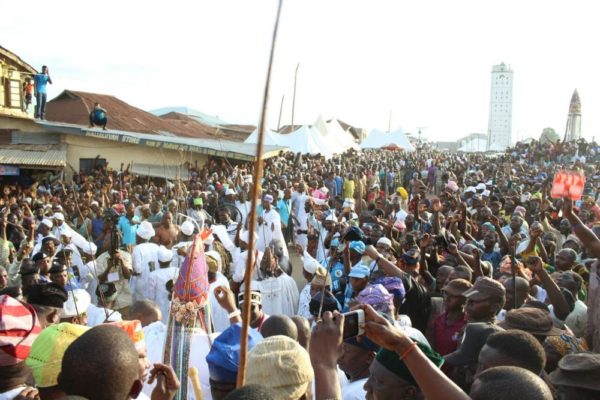