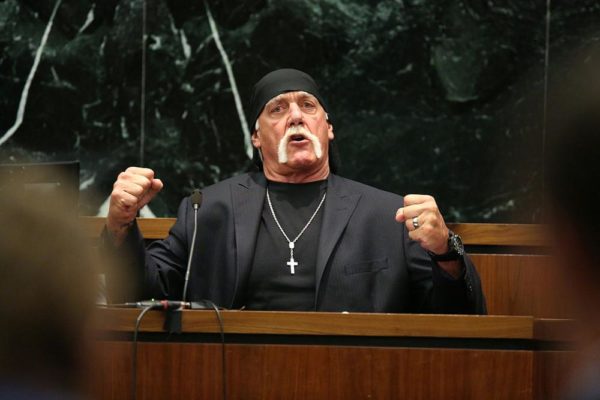 ST PETERSBURG, FL – MARCH 08: NY POST OUT Terry Bollea, aka Hulk Hogan, testifies in court during his trial against Gawker Media at the Pinellas County Courthouse on March 8, 2016 in St Petersburg, Florida. Bollea is taking legal action against Gawker in a USD 100 million lawsuit for releasing a video of him having sex with his best friends wife. (Photo by John Pendygraft-Pool/Getty Images)

Hulk Hogan‘s battle with Gawker has been on for four years and the two have finally reached a settlement.

According to the New York Times, Hulk Hogan has settled his sex tape lawsuit with Gawker for $31 million.

According to court documents, the settlement comes eight months after courts awarded Hulk Hogan $140 million in damages after the site posted a sex tape of him.

“After four years of litigation funded by a billionaire with a grudge going back even further, a settlement has been reached,” Gawker founder Nick Denton wrote in a blog post. “The saga is over. Hogan’s retirement will be comfortable.”

“As with any negotiation for resolution, all parties have agreed it is time to move on,” David Houston, Hulk‘s lawyer, said in a statement.

Related Topics:GawkerHulk Hogan
Up Next