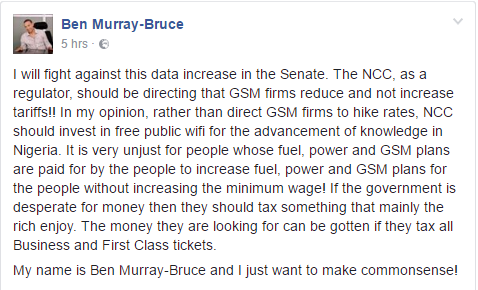 Senator Ben Murray-Bruce has said that he will fight against the proposed data increase in the Senate.

He made this known in a Facebook Post on Wednesday, where he said that the Nigerian Communications Commission (NCC), as a regulator, should direct GSM firms to reduce and not increase tariffs.

I will fight against this data increase in the Senate. The NCC, as a regulator, should be directing that GSM firms reduce and not increase tariffs!! In my opinion, rather than direct GSM firms to hike rates, NCC should invest in free public wifi for the advancement of knowledge in Nigeria. It is very unjust for people whose fuel, power and GSM plans are paid for by the people to increase fuel, power and GSM plans for the people without increasing the minimum wage! If the government is desperate for money then they should tax something that mainly the rich enjoy. The money they are looking for can be gotten if they tax all Business and First Class tickets.

My name is Ben Murray-Bruce and I just want to make commonsense!

Findings by TheCable has revealed that the NCC approved the new “floor plan”, or minimum pricing, for data services by mobile operators “to address market distortions, unhealthy price wars and value erosion that could threaten the going concern of the service providers”.

In a letter to the big operators, the commission had directed that the floor plan for data should be 0.90k/MB effective December 1, 2016 “pending the finalisation of the study on the determination of cost-based pricing for retail broadband and data services in Nigeria”.

As virtually all the big operators were already charging below the new floor rate, the directive meant an automatic increase in charges for data services.

However, small operators and new entrants in the data market, such as Spectranet, Ntel and Smile, are still allowed to charge below 0.90k/MB.

The regulator is of the opinion that without a price floor, the dominant operators can engage in predatory pricing to drive down other operators, meaning the industry could be moving towards a monopoly.

A senior NCC official told TheCable that CDMA operators – such as Multilinks and Starcomms – were muscled out of the market by the Big Four because of their market power.

“At the rate they are crashing data tariffs, there is every chance that they will soon kill all the small operators and new entrants. Part of the functions and duties of NCC is to check monopolistic and oligopolistic behaviours in the telecom market,” the official said.

Globacom currently charges 21k/MB apparently because of the economies of scale advantage, compared to Smile which charges 84k/MB, or four times Glo’s rate, in order to break even.

Under the new tariff regime, Smile can continue to charge 84k but Glo will have to move up to 90k/MB – a 328% increase.

The document seen by TheCable says in line with its mandate of promoting fair competition in the industry, the commission monitored activities in the data market segment “and observed that a significant reduction in current market prices for data services; in addition to complaints by subscribers to re-introduce the price floor for data services”.

It gave five reasons for re-introducing the price floor, which was first introduced in 2014 and suspended in October 2015.

It said: “When markets work efficiently, companies provide customers with more choice, lower prices better quality products and services. However, due to market imperfections, market forces alone cannot be entirely relied upon to discipline the operators to ensure efficient market conducts and promote market efficiency. It is in recognition of the above that regulatory intervention is required and has become a veritable tool to facilitate competition and create a level playing field between competitors.”

The Senate has also resolved to halt the new tariff approval, adding that it condemns, “in all totality” the planned move.

This followed a motion raised by the Deputy Senate Leader Ibn N’Allah on Wednesday.

I was Never Remanded in Kirikiri Prison – Seun Egbegbe | WATCH