Gov. El-Rufai Cautions against Reprisal after Protesters Attacked his Convoy in Kafanchan 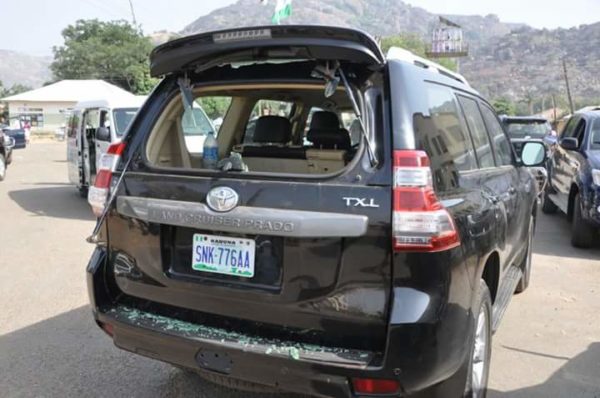 One of the damaged cars

Governor Nasir El-Rufai on Wednesday appealed to citizens not to respond to the treatment meted on him by demonstrators in Kafanchan, Jema’a local government area on Tuesday.

The Governor and his entourage were pelted with stones and some of the vehicles broken after addressing some demonstrators immediately after he chaired Kaduna State Security Council meeting in the area.

The governor’s spokesman, Samuel Aruwan, disclosed in an official statement that El-Rufai considers the unfortunate events as part of the burdens of leadership. He added that the Governor is of the view that there must be no reaction to the incident other than a continued commitment to restore peace and harmony.

The statement quoted the Governor as saying:

In the name of God, I am begging you. No one should take the law into his or her hand over what happened in Kafanchan. Although it is unfortunate, but we must rise above induced prejudice and hatred. We must defeat hate with patience, love and dedication to duty and not eye for an eye.

It is also a burden of leadership and we will, by the special grace of God, overcome these forces of darkness who are dividing our citizens using religion, ethnicity and politics. I commend high the sense of professionalism exhibited by security personnel.

I listened to three of the women who led the protesters as they asked me questions. I answered them and even invited them to a larger meeting, but they went on rampage and burnt the residence of the local government chairman.

The government of Kaduna State and the Security Council sympathize with the chairman of Jema’a local government, Dr. Bege Katuka and his family over the unfortunate incident that led to the burning of their home. Our prayers and support go with them.

The governor has also imposed a 24-hour curfew on three local government areas in the state – Zangon-Kataf, Kaura and Jema’a.

The Kaduna State Security Council said it took the step based on credible intelligence about risks to lives and property in the affected areas.

Anti-Corruption War: Whistle-blowers to get Part of Recovered Looted Funds