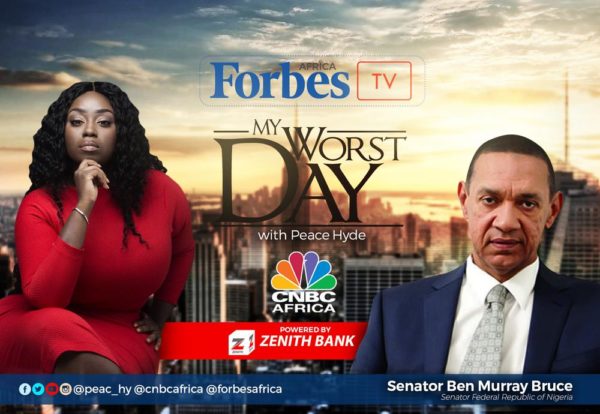 No man steps in the same river twice for it is not the same river and he is not the same man. In business no two days are ever the same and challenges faced by others, although they may have some aspects in common, tends to affect the individuals in different ways. This month, as we stayed glued to the seat for the gripping account of Senator Ben Murray Bruce on Forbes Africa TV “My Worst Day with Peace Hyde”, here are 15 things we learnt from the show.

According to Senator Bruce, Nigeria needs a common sense minister whose job is to just think about Nigeria and find solutions to the problems of Nigeria, without enriching himself. Sounds simple enough, who wants to be the Minister for Common Sense?

Always remember the ideas you have is your collateral and you have to protect your intellectual property to prevent someone from stealing the next big million-dollar move.

Sometimes the best business ideas happen entirely be accident, according Senator Bruce, the passion for the entertainment industry happened entirely by accident, which as led to the mammoth Silverbird group.

As the director of NTA at the time Senator Ben Bruce went against convention to air the Miss World Pageant during a live telecast instead of watch the popular evening news and Nigeria won the pageant.

Not all challenges in business are created internally; sometimes-external forces can harm your business as Senator Bruce experienced when a publication outside his control led to catastrophic consequences.

The media has the power to create or destroy your organization by what they say about you and as a result it is important to understand and respect that power.

As an entrepreneur, it is important to understand that there are consequences to every thing we do and in Senator Bruce’s experience the action of protestors resulted in a loss of $10 million for him.

As senator Bruce puts it if Nigeria could not look after 18 year old girls then why would foreign investors bring their money into the country. Always manage the little things you have well.

For Senator Bruce, his background is not a city or a country but the world. Expand your vision and immediately a world of new opportunities opens up to you.

Another profound knowledge from Senator Bruce, money only goes where there is no fear and peace so create an enabling an environment without fear and watch money run into Nigeria like the advanced countries in the world.

Do not attack your own country but instead help advance it by pushing positivity.

12.Give help to the poor and save your life!

According to Senator Bruce, it is our responsibility to support the poor to prevent crimes of violence and attacks from spiralling out of control in Nigeria. Lets all do our part to help the needy.

Senator Bruce says, as you grow older you need less and so once poverty is no longer an issue, the economy will be in a much better position.

14. Words can be powerful weapons

After a speech at a conference by Senator Bruce a young boy stood up and shouted lets kill all our leaders. It is important to watch what you say so that you do not incite somebody to do the wrong thing. That also goes in business.

15. Economics is the answer to all our problems

According to the senator, most of the problems we face as a nation has nothing to do with religion but more to do with the redistribution of wealth and once we have an equilibrium most of our problems will vanish.

Related Topics:My Worst Day with Peace Hyde
Up Next