Igbos are "the most truthful, committed, and trustworthy people but often misunderstood in the country" - Gov. Okorocha 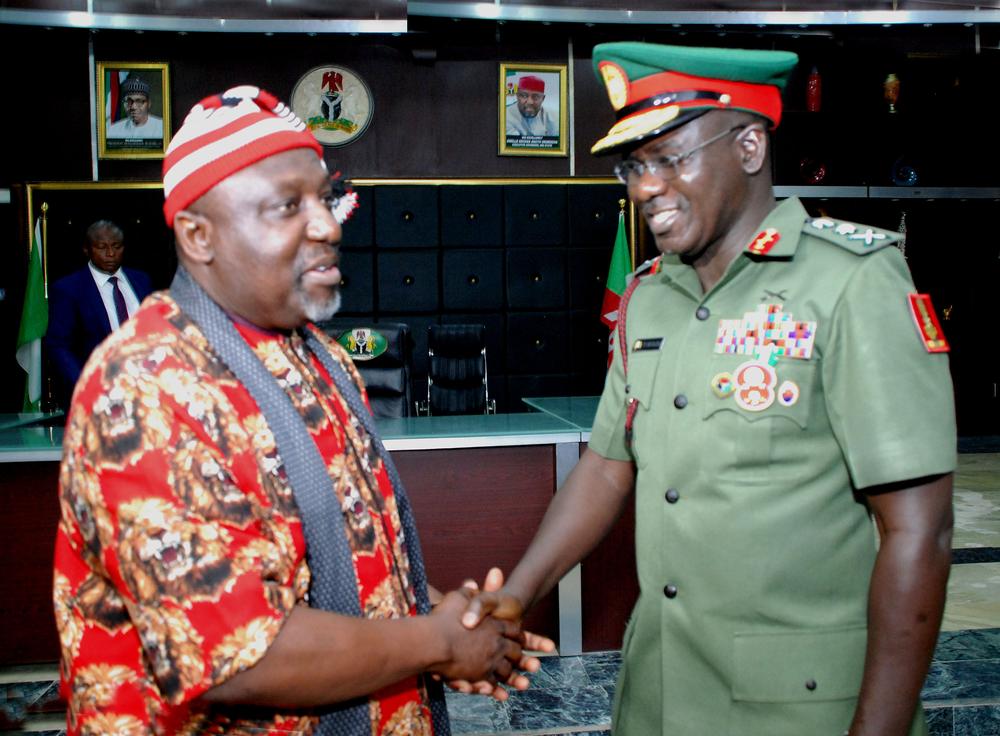 Gov. Rochas Okorocha of Imo (L) welcoming the Chief of Army Staff, Lt.-Gen.Tukur Buratai when the Army chief led other officers on a courtesy call on the governor at the Government House in Owerri on Monday, over the 2016 Chief of Army Staff Conference taking place in Owerri soon.
8886/6/12/2016/Chidi Opara/BJO/NAN

Governor Rochas Okorocha of Imo, on Monday described the Igbos as “the most truthful, committed and trustworthy people but often misunderstood in the country.’’

Speaking when he received the Chief of Army Staff, Lt.-Gen. Tukur Buratai, at the Government House, Owerri, Okorocha said that Imo had witnessed tremendous progress under his leadership.

He described Imo as as “one of the safest states’’ in Nigeria, where there was no more kidnapping, armed robbery, cultism and baby factory syndrome.

He attributed the relative peace and security in the state to the efforts of the security agencies, especially the Nigerian army.

He commended the military for the successes being recorded in the fight against insurgency and terrorism in the North East.

He noted that such successes had not being achieved in Syria and other parts of the world battling terrorism.

Okorocha also commended the army for the “Exercise Crocodile Smile” and newly introduced “Exercise Python Dance” in the South-South and South-East zone.

He urged the security agencies to do whatever they could to secure the pipelines to enable free flow of oil to generate revenue for the nation.

He promised to continue to support the army.

Earlier, Buratai told the governor that he was in the state for the 2016 Chief of Army Staff Conference.

He told the governor that “Python Dance” was a training exercise to update troops in the South- East on the rudiments and basics of their job.

Buratai said that during the conference the army would offer free medical services to the people of the state.

Gov. Rochas Okorocha of Imo (Front Row, 8th, L); the Chief of Army Staff, Lt.- Gen.Tukur Buratai (Front Row, 7th, L); and officials of the Army, Police and the state Government, when the Army chief led other officers on a courtesy call on the governor at the Government House in Owerri on Monday, over the 2016 Chief of Army Staff Conference taking place in Owerri soon. 8885/6/12/2016/Chidi Opara/BJO/NAN