President Buhari Condoles with Families of Victims of Madagali Blasts 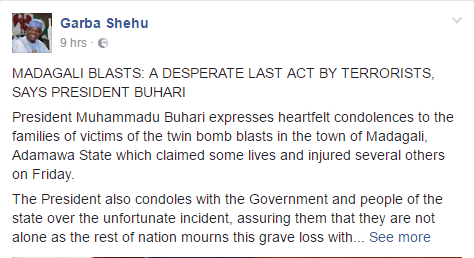 President Muhammadu Buhari has condoled with families of victims of the twin bomb blasts in Madagali, Adamawa, which claimed some lives and injured several others on Friday.

The President also condoled with the Government and people of the state over the unfortunate incident, assuring them that they were not alone as the rest of nation was mourning the grave loss with them.

In a statement issued by his Senior Special Assistant on Media and Publicity, Garba Shehu on Friday in Abuja, Buhari restated that “putting an end to this senseless loss of innocent lives remains a top priority of this administration”.

According to him, over the past few weeks, the Nigerian military have made significant advancements in an offensive aimed at slamming the final nail in the coffin of Boko Haram.

“This latest attack is obviously an act of desperation, but the Nigerian military will neither be distracted nor relent.”

Buhari urged Nigerians to be more vigilant and immediately report any suspicious activity to the nearest security and law enforcement agency.

“The battle against terrorism is a joint effort involving all citizens, both government and governed. Together, Nigerians can and will defeat the evil that is Boko Haram,” he declared.

The President prayed that God would comfort the bereaved families and wished the injured ones speedy recovery.

Muhammed, who confirmed the development in a telephone interview, said 57 of the injured were critical and 120 minor.

He said the critically injured were rushed to Mubi General Hospital and Yola Specialists Hospital, while those that sustained minor injuries were treated and discharged .

The Madagali Market operates on Fridays and the two blasts occurred at the grains and second- hand clothes sections of the market.

Nkem Ndem: The Thing About ‘Fighting’ For a Man