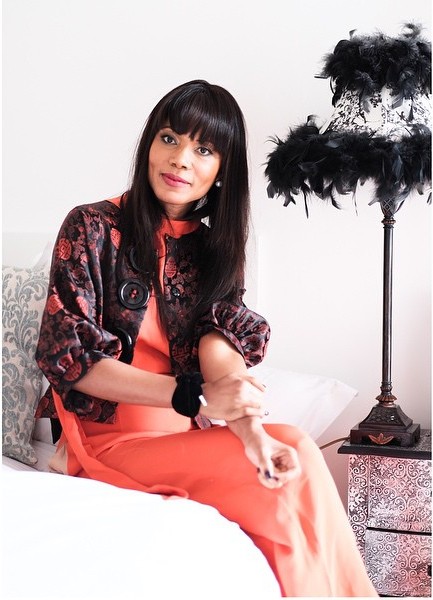 A couple of days ago TV personality Funmi Iyanda caused quite the reaction when she tweeted about her disinterest in marriage.

She posted on her Twitter page “I have never wanted to be married. I like it for others who like it for themselves. But as for me, Ms Funmi Iyanda, no thank you,” and it got a conversation started in her mentions.

Yesterday she posted a short article on her Medium page sharing the back story of why she has no interest in marriage.

In the write-up, she shares some of her childhood experiences, including how she grew up with her father after her mum took off and her father’s love for his liquor. She also talks about how she was sexually abused and how her step-mother tried to match-make her when she was younger.

The article was done in four parts, divided into years.

Talking about her father, she says:

You see, my father is a brother who drank which is bad enough but he is also a brother who is single, his wife having disappeared 6 years previously. Who knows if it was his drinking that disappeared her or so l hear them say.

On her father getting remarried, she says:

Daddy has been married almost two years now, not to the sister that brother Eleyinmi found but to another good sister, a sister so full of love for Jehovah, he must be high fiving angel Gabriel. She is sister Ireti. She and l are not talking now because we fought over a brother who wanted to marry me. That happened last week.

On her step-mother, she says:

My step mum Ireti is tall, full figured and pretty, daddy must have something. She had my baby sister last year and called her JehovahTosin, which I personally thought was an overkill, Oluwatosin is just as good. Tosin is a gorgeous baby who follows me everywhere, we both look like daddy. We call my step mum Mama Tosin. They say I’m a moody and intense teenager; mama Tosin is loud and haphazard, more dutiful to Jehovah than to daddy but they like each other, I think.

On being a teenager, she says:

I like books and music, nothing else. I don’t think boys like me, the onetime l had gone with Ronke to visit her boyfriend, his creepy friend had tried to touch my breasts, and they were not even a good size. I didn’t know Jehovah Witness girls could have boyfriends outside the church but Ronke was so beautiful, who could blame them, or her. I don’t believe the few boys who say I’m pretty, l think they just want to have sex, which is a sin. I’m determined not to have sex or get pregnant or anything stupid like that. I’m going to university somehow. Maami told me l must before she went missing, what if she came back?

On being sexually abused by adults, she says:

Teaching from house to house wasn’t easy either especially as l had to convince parents and get referrals when l was the daughter of a brother who drank. I am bad at maths so I have to teach myself so l could teach the children. The parents always treat me like l don’t exist except sometimes when the fathers squeeze my breasts, l hate them squeezing my breasts, they are not even big.

On her stepmother matchmaking her and not wanting to get married, she says:

So it was that mama Tosin, concocted a plan to match make me with this man who worked in an oil company. She was blissfully unaware that the old and gross man -I hear he’s almost 30- had already been giving me bad vibes with lecherous moves. Brother or no, l can always tell the ones who want to get into my pants but I’m determined to go to university and become a doctor. Last week he came visiting bearing gifts, which he handed to me in a shopping bag. There was that new Seiko watch, the one everyone wanted badly, a bottle of Samsara perfume and 50 naira. Mama Tosin went to the kitchen for some reason. In that time he stepped up to me and tried to hug me, his penis poking my long skirt like all those stupid men on the bus to school. I really don’t know what came over me but a blinding rage travelled through my belly button and flung the gift bag out of our second floor window. It landed back on the formerly orange sofa because the window had mosquito netting and burglar bars. I was so mad; l tore the netting with my bare hands and tossed the bag out through the bars. Everybody has been angry with me since because you can’t talk emotions with parents. Daddy isn’t laughing or playing music as much these days, it is almost as if he is an elder even though they haven’t made him one still. I miss my daddy.If he asked me l would have told him that l was appalled that this man and everyone else thought that of all the possibilities open to me at age 16, the best was marriage which seemed the least intelligent survivalist option. I couldn’t communicate how disgusted and belittled l felt. Nothing about it made me feel excited or hopeful. The thought of it made me feel entrapped and frightened. I hate feeling trapped.

On still not wanting to get married, she says:

Related Topics:Funmi Iyanda
Up Next