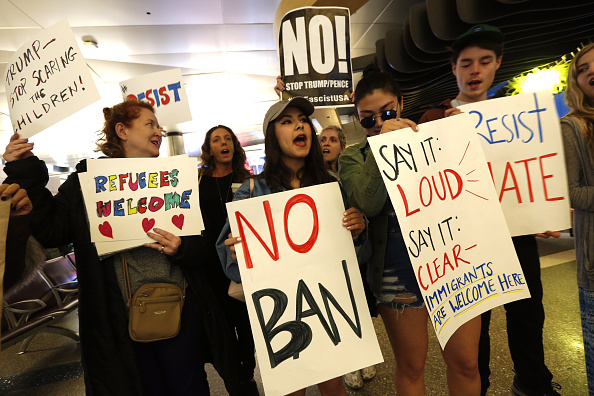 LOS ANGELES, CA – JANUARY 29, 2017 – People continue to protest President Trump’s travel ban at the Tom Bradley Terminal at LAX on January 29, 2017 in Los Angeles, California. Trump’s executive order suspends all refugee entries for 120 days. It also indefinitely blocks Syrian refugees and bars entry to the U.S. For 90 days for those traveling from seven Muslim-majority countries: Iran, Iraq, Libya, Somalia, Suday, Syria and Yemen. A federal judge in New York ordered a halt to deportations of travelers who arrived at airports with valid visas to enter the U.S..

The Iraqi parliament on Monday called on the government to reply in kind to U.S. President Donald Trump’s ban on Iraqi citizens entering the United States.

U.S. air power and military advisors have played a key role in its campaign to regain territory from the Islamic State extremist group.

It was not clear if the move was intended to apply to the U.S. military advisors.

The Pentagon says its advisors are embedded within Iraqi field commanders in the campaign to recapture Iraq’s second-largest city, Mosul.

The U.S.-led coalition against Islamic State also said it has trained some 70,000 Iraqi troops for the campaign against the extremists.

Related Topics:Donald TrumpIraqIraqi Parliament
Up Next

Amaechi and Wike in War of Words over Impounded Helicopters