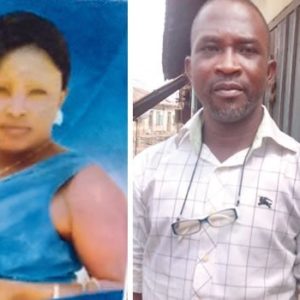 Gloria Samson, aged 34, reportedly left her hometown in Markurdi Benue State on the 28th of December 2016 to commit suicide after getting depressed by the crash of the MMM scheme around early December. After saying goodbye to her two sons, she left a message for her husband begging to be forgiven for her wrong doings and she then headed off to River Benue to drown herself.

It is alleged that she had invested and lost N400,000 into the scheme after borrowing numerous loans from various sources in the town without her husband’s knowledge.

Her husband, Samson David (pictured above), was told of the discovery of her body in the river on the 2nd of January 2017. Her body was eventually identified by a neighbour in the Morgue of the Federal Medical Centre in Makurdi on the 17th of January 2017.

The news of the crash of the MMM Scheme went viral in early December and caused a lot of fright amongst its members. Several of Gloria’s neighbours corroborated that she had become depressed upon hearing this news and this eventually lead to her death.

Related Topics:#MMMNigeriaMMM crash
Up Next