As the chief foreign affairs executive in the Obama Administration, the US Secretary of State – the Rt. Hon. John Kerry in between managing global trouble and flashpoints China, Syria, Iran, Israel and Brexit, has met with 14-year-old Zuriel Oduwole in his office at the U.S. State Department in Washington DC, to honor her.

He commended Zuriel for her ‘clarity of purpose’ in her fight for Girls Education in Africa through her Dream Up, Speak Up, Stand Up project and her other secondary initiatives such as her filmmaking class for unemployed youths. She has now taught filmmaking to more than 305 youths across 4 African countries – including Namibia, Kenya, Mauritius and Nigeria. The secretary was impressed that a student from her first film class workshop in February 2016 – 24 year old Namibian Anna Kalola, produced her first documentary just 9 months later, in November 2016 in Windhoek.

“I don’t believe there is anyone out there under the age of 35 doing anything nearly as much as what you are doing,” the Secretary told Zuriel. “It is incredible you have seen clearly the importance of these global challenges, and taken bold steps to do something about them. As far as I know, you are the world’s most powerful Girl, but you probably just don’t know it! You are inspiring and empowering Africa’s youth, and that is powerful”. “I try, Zuriel replied,” but Secretary Kerry responded saying ‘No, you are not trying, you are a doer, and we like to recognize talent like yours”. 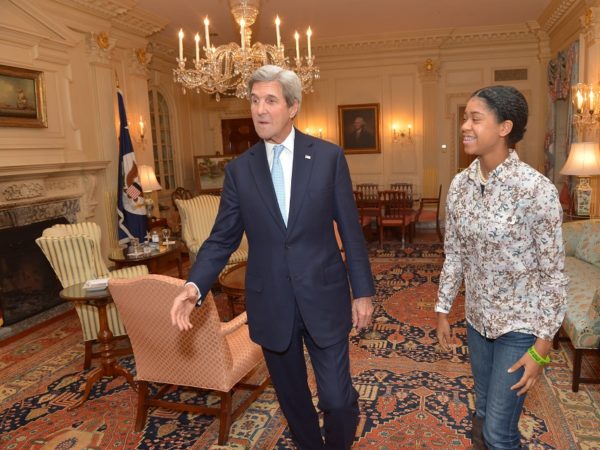 Zuriel asked Secretary Kerry what his most difficult challenge was in the last four years as Secretary of State. In one word, he replied ‘Syria’. He explained the difficulty was because of the various proxies and complexities of dealing with many factions with varying interests in the country.

Secretary Kerry told the  young, independent filmmaker, who has now met one-one-one with 23 World leaders, addressed more than 24,900 children across 11 countries on Education, and who was invited to speak at the UN last September, that because of her continued development work, she might one day be a future U.S. Secretary of State, or as many in the diplomatic circles now believe, perhaps the youngest UN Secretary-General in history.

Zuriel thanked the Secretary for not leaving out the issue of Girls Education in his programs over the last 4 years, and hopes the next US Secretary of State continues with Secretary Kerry’s policies, when he or she takes over after January 20th.

Reward Nsirim’s “Fresh Air and Other Stories”: Exploring the Ups and Downs of Being Nigerian #LiterallyWhatsHot