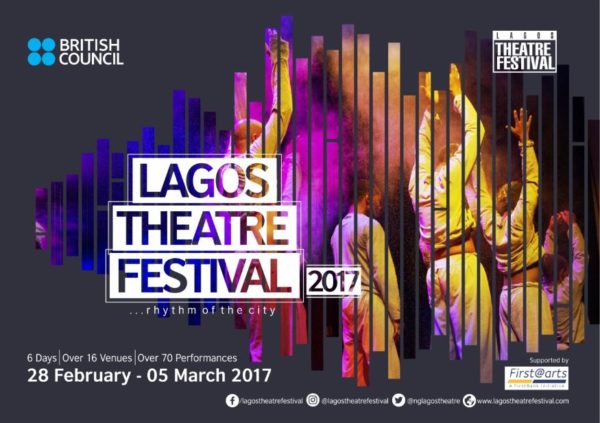 From Tuesday, February 28 – Sunday, March 5, 2017, over 500 artists will gather to present over 70 performances at 16 Venues, spanning 6 days at the Lagos Theatre Festival 2017. There will be something for everyone; from the new theatre fans young or old and returning visitors to the Festival.

With 109 shows, 35 companies and 5,500 theatre goers attending in 2016, Lagos Theatre Festival remains one of the most diverse and exciting events of its kind and will continue to present the best in contemporary and classic work from leading artists.

This edition of the Lagos Theatre Festival will portray the rhythm, soul and sights of Lagos. The theme was selected to capture through performance, the sounds of Lagos expressed in the comings and goings, the repetitive activities and the music of the city. We will be seeing works that reflect specific auditory perspectives like noises, rhythm, beats, language, etc. from a range of socio-economic and geographic groupings across Lagos.

This year, there will be 5 curated shows from the UK and Nigeria in the festival. Four of the curated shows are winning scripts from the playwriting competition won by James Ene-Henshaw,  Joy Isi Bewaji, Bode Asiyanbi and Paul Ugbede. The plays will be produced by Crown Troupe of Africa, Beeta Universal Productions, Tunji Sotimirin and Oxzygen Koncepts following grants awarded by the British Council.

The fringe shows will see 35 companies from Nigeria, South Africa and Zimbabwe showcase work from all genres in the performing arts. These include comedy, experiential theatre, musical and Drama.

Ojoma Ochai, Director Arts, British Council said “We are very proud of what Lagos Theatre Festival has achieved in terms of being a platform through which the Nigerian theatre sector engages with the rest of the world. This year’s festival will see visitors from International Network for Contemporary Performing Arts (IETM), International Association of Theatre Critics (IATC) and festival management organisations from around the UK like Walk the Plank, London International Festival of Theatre (LIFT) and institutions like Edinburgh Napier University – all possible only because the LTF platforms exists not just to show great work, but to ensure that international exchange and collaboration happens”

Kenneth Uphopho, Festival Director, Lagos Theatre Festival said “it’s become much more than a festival! What we are offering at this year’s LTF  is a lifestyle…. We want you our esteemed audience to look forward to a thrilling experience. See you there!” For more details on the festival and all the activities visit www.lagostheatrefestival.com

About the British Council

The British Council is the UK’s international organisation for cultural relations and educational opportunities. We create friendly knowledge and understanding between the people of the UK and other countries. Using the UK’s cultural resources we make a positive contribution to the countries we work with– changing lives by creating opportunities, building connections and engendering trust.

We work with over 100 countries across the world in the fields of arts and culture, English language, education and civil society. Each year we reach over 20 million people face-to-face and more than 500 million people online, via broadcasts and publications.

Founded in 1934, we are a UK charity governed by Royal Charter and a UK public body. The majority of our income is raised delivering a range of projects and contracts in English teaching and examinations, education and development contracts and from partnerships with public and private organisations. Eighteen per cent of our funding is received from the UK government.

It’s the Season of Love! Treat your Loved One to a Special Valentine Brunch at the Southern Sun Ikoyi – Enter NOW to WIN on BellaNaija