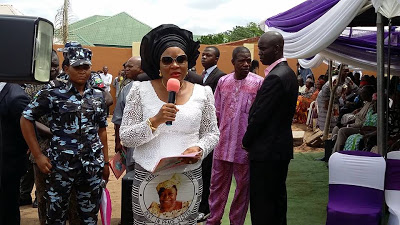 Wife of the Benue Governor, Eunice Ortom, has appealed to Tor Tiv-elect, Prof. James Ayatse, to review bride-prices in Tiv land, to enable young men get married “when due”.

Ortom made the appeal on Tuesday, when she paid a courtesy visit to the Tor Tiv-elect in Makurdi.

She decried the high demands made on young men seeking to marry Tiv daughters, and described the situation as “very discouraging”.

“Such high demands discourage many bachelors from even attempting to get married; the result is that many young girls cannot find husbands,” she said.

The governor’s wife argued that such exorbitant charges were not part of Tiv culture.

“Such charges are imported; our traditional rulers should discard them,” she said.

While noting that bride-price payment was sacrosanct in every marriage, she cautioned parents against selling their daughters “especially since the relationship between in-laws remains, long after such marriage rites”.

She regretted that many young men preferred to elope with their loved ones owing to such huge monetary demands, and stressed the need to make the process affordable so as to restore the sanctity of the marriage institution.

Ortom pledged her support to the new monarch, saying that his emergence was an act of God that would bring unity to the Tiv nation.

Responding, the traditional ruler promised to work toward a united Tiv nation, and promised to be truthful, transparent and promote the fear of God at all times.

He also promised to uphold valuable cultural practises and repeal negative ones.

Ayatse decried the politics of rancour and acrimony in Tiv land, and promised to reconcile Tiv sons and daughters toward building a united front.

Meet Teni Zaccheaus JR, Jameson Brand Ambassador for Nigeria as He Discusses His Work With the Famous Brand and What to Expect at this Year’s Edition of Jameson Connects