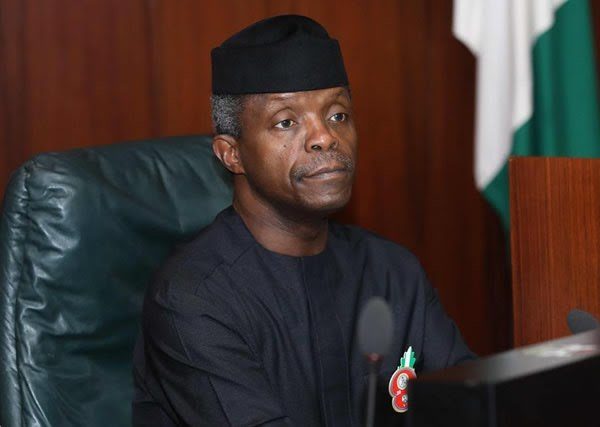 Acting President Yemi Osinbajo on Friday promised that the Federal Government is planning an urgent relief to poultry farmers in the country to save the industry from collapse.

He gave the indication during his second meeting in the week with representatives of the poultry industry at the Presidential Villa.

The intervention is part of an urgent effort by the federal government to address challenges in the agricultural sub-sector in line with its policy on self-sufficiency in food production.

The poultry industry has had to contend with a number of challenges including an outbreak of Avian Influenza which affected almost four million birds in 2015.

It also suffered non-allocation of Foreign Exchange for the importation of needed machinery and other critical inputs, and high production costs in the industry.

At the Friday meeting relevant ministers and agency heads came together to fashion out how to bail-out the ailing poultry industry.

“The poultry industry is a local industry that needs to be protected urgently,” Osinbajo said.

Osinbajo said at the meeting where specific measures were tabled and considered on how the federal government could be of help.

He said the industry should be a major plank of the agriculture sector and as such the Buhari administration would ensure that it got help regarding the challenges being faced by operators of the sub-sector.

He added that by supporting the local industry, poultry-related importation which was currently a drain on the country’s Foreign Exchange could be a thing of the past.

In his remarks, Dr. Ayoola Oduntan, the President, Poultry Association of Nigeria, noted that poultry presently contributed 25 per cent of the Agricultural Gross Domestic Product of the Nigerian economy amounting to N1.6 trillion.

He added that Nigeria was rated as the number one egg-producing nation and number four in poultry meat in the continent.

The poultry sub-sector is said to generate over 14 million direct and indirect jobs in the country.

Present at the meeting were the Finance Minister, Kemi Adeosun, Agriculture and Rural Development Minister of State Heineken Lokpobiri.

Others were the Comptroller-General of the Nigeria Customs Service (NCS), Colonel Hameed Ali (retired), and the Central Bank of Nigeria (CBN) Governor, Godwin Emefiele.

“What we have is that we are going to develop a programme that will deliberately grow more maize which will satisfy not only our local market but the international market.

We have a demand from Algeria and some other countries.

They are saying that if we are able to grow two million metric tons and above for them they are going to construct a rail line to Kano to come and buy,’’ the minister disclosed.

He also advised farmers hoarding maize with the intention of selling later to the federal government to desist as such produce would not be bought from them by the government.

“It is also an opportunity to also send this signal to those who are hording maize that anybody who is hording maize does so at his own peril.

Federal Government will not buy maize.

The federal government buys grains as the buyer of last resort,’’ he said.