#BBNaija: Day 46 - Birthday Girl Tboss gets a Special Message from Miyonse, Marvis & Efe are Married and Housemates win their Wager!

Did you watch Day 46 of the Big Brother Reality TV show?

It’s TBoss’ birthday! She’d been up to her usual antics, pranking TTT with her “ice cold hand” attack in the changing room. 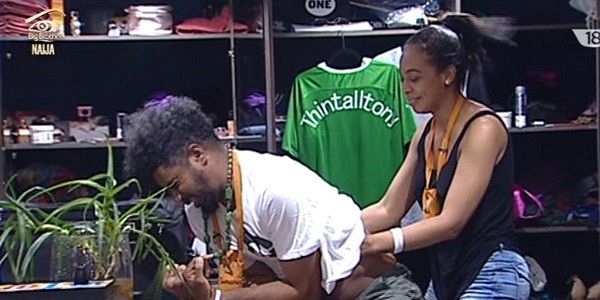 Afterward she treated the bride to be, Marvis to a facial before donning her own mask and hopping into the shower. The Housemates ambushed her singing “Happy Birthday” with Debie-Rise and Bassey providing accompaniment on the guitar and harmonica. 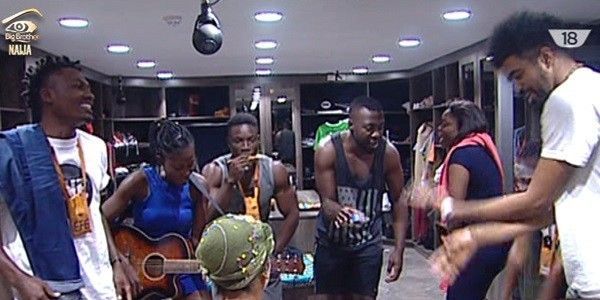 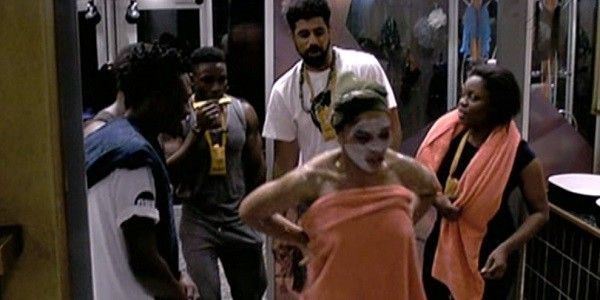 TBoss rushed out and wrapped her towel around her chest before taking a seat in the dressing room and savoring the sweet gesture from her Housemates who also threw confetti all over her! Efe dropped a few bars calling her “the best” despite their tiff earlier. All the while, the birthday girl was smiling cheek to cheek and seemed overcome with emotion. 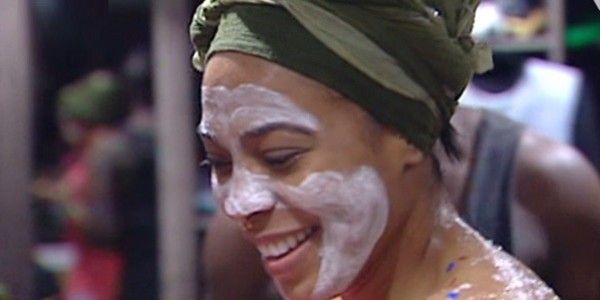 A birthday message and a wedding.

After the morning’s work out session which was just stretches led by Igwe TTT, the Housemates went back into the House for a light breakfast of bread and tea. Biggie instructed the Housemates to move into the bedroom area and within five minutes Biggie announced the store room was open. TTT carried TBoss across the threshold all the way to the store room and the loud screams of joy that emanated from TBoss mirrored her excitement as she saw her birthday cake and a bottle of bubbly waiting for her in there.

The icing on the cake was when Biggie instructed the Housemates to gather in the lounge. They all convened and speculated about a visitor coming into the House, but they were all pleasantly shocked when Miyonse popped up on the screen of the House monitor to wish TBoss a happy birthday. He also thanked her for the times they spent together in the House and encouraged her to come home with the prize before signing out. 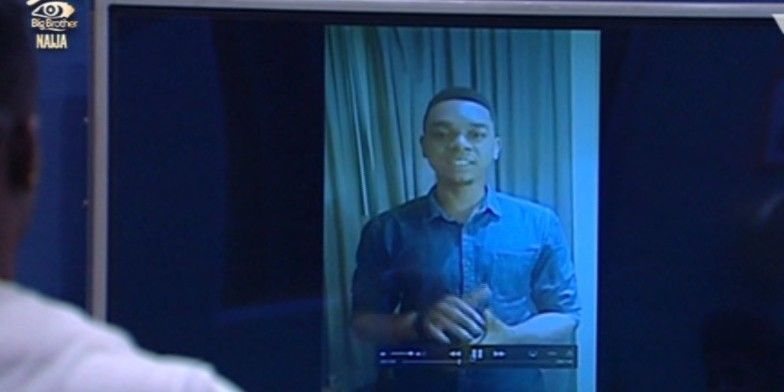 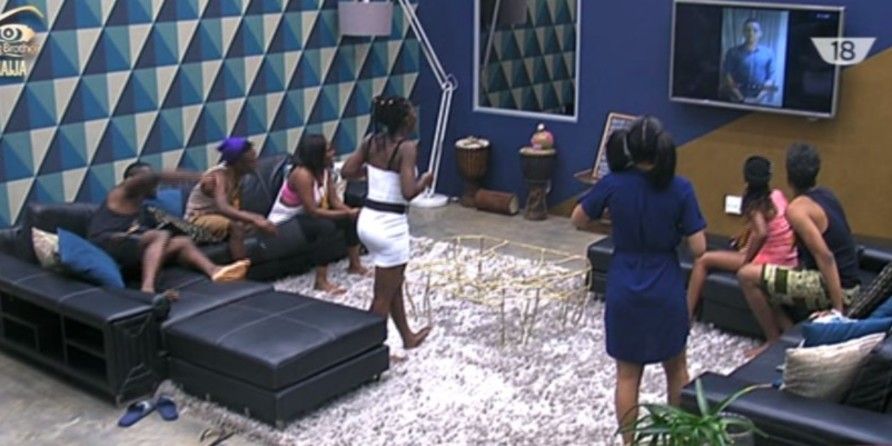 It was a very emotional message for TBoss as she got a bit teary eyed, but the cutting of the cake couldn’t wait any longer as they all gathered in the kitchen to cut the cake amidst singing happy birthday songs. 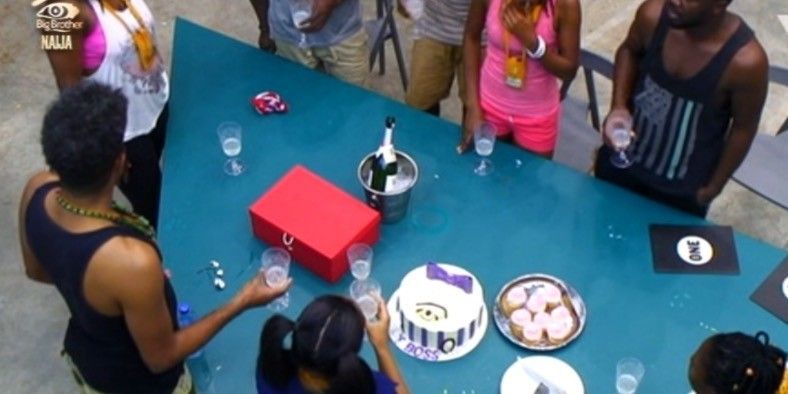 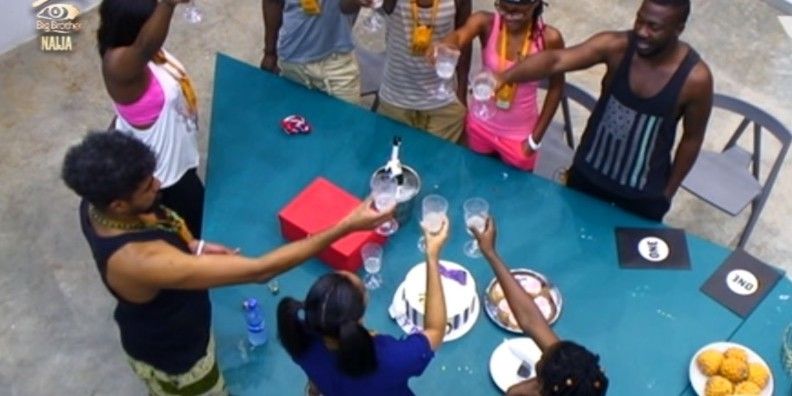 The party wasn’t going to be a long one, as Biggie had earlier cautioned them that today was the day for the wedding between Efe and Marvis and they needed to get ready for all the festivities ahead. The big warning was that their 100% wager was at stake tonight, so they all needed to perform at their optimal best.

Igwe TTT summoned the Housemates into the lounge so he could read out the new Task Brief to everybody. The Brief was very straight forward. The Housemates needed to prepare a feast for the wedding between Efe and Marvis and to help them prepare, Biggie had sent them some supplies by the official sponsors Payporte.

Biggie further elaborated that the Housemates needed to prepare a feast suitable for a wedding but quipped that they needed to put their best foot forward as there was going to be invited guests attending the wedding.

The Housemates quickly got about prepping the condiments and cooking all the planned dishes they had contemplated. It was fun to see every single Housemate in the kitchen either helping to prep, or taking care of washing up, with Bisola championing the kitchen duties duly assisted by the birthday girl TBoss. 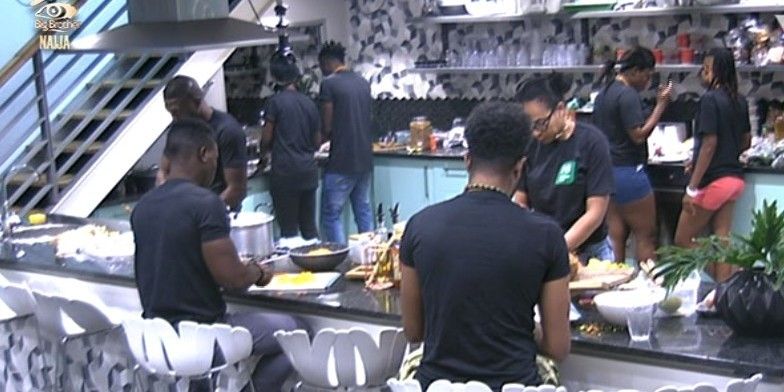 The Housemates had four hours to finish cooking and to kick start the festivities, and while the ladies were cooking, the father of the bride TTT and the master of ceremonies Bassey sat on the dining table to plan the order of proceedings once the festivities started.

The Bride’s parents accepted the Groom’s N24 bride price offer and the traditional engagement was sealed with a kiss.

The two Housemates were Voted by the public as their favorite Bride and Groom for the #BBWedding, which was this week’s theme.

The Groom’s representatives presented the Bride’s parents, ThinTallTony and Bisola with gifts and further engaged them in the bride price talks. They offered N24 to the Bride’s family, an amount they accepted. 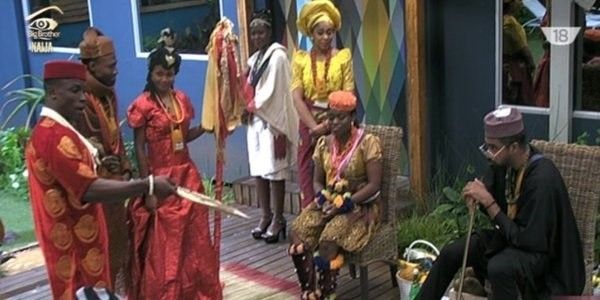 After the talks, the blushing Bride was ushered into the garden by her friend and wedding entertainer, Debie-Rise, where her Groom was waiting with his representatives, including his father Bally. She was asked if she recognized the Groom, who was visibly smiling from ear to ear, and she said yes. “His name is Efe and he is the love of my life,” she said.

The MC, Bassey informed the Bride that her parents had accepted the bride price, with her father adding that it was up to her to accept or decline. “The final decision is in the hands of the beautiful princess,” he said. The Bride accepted, making this the end of the talks between the two families and the start of the celebrations.

The Housemates prepared all week for the wedding, from planning the menu to creating a script and most of them felt upbeat about their performance during their joint Diary Sessions.

“First time in the Big Brother House, we brought characteristics of all the different states into one wedding. I think we’ve broken a record!”

This was how the traditional engagement MC, Bassey described the ceremony during his joint Diary Session with the Groom’s father, Bally.

Biggie called the Bride and Groom, Marvis and Efe first into the Diary Room after the traditional engagement and asked them to rate their performance, to which they both responded positively.

“It must have been a real dress rehearsal for future and it sounds like you were both in your ‘home turf’. Should we expect something from the two of you outside of the House,” teased Biggie. They responded with laughter, with Marvis adding that, “We’ll keep you guessing Biggie,” as she giggled.

She further said the engagement was far beyond her expectations, adding that the Bride’s parents, Bisola and ThinTallTony stole the show with their performance. 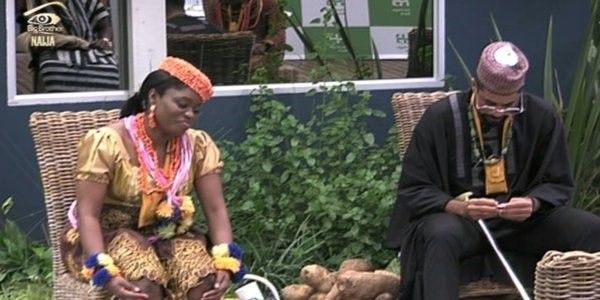 The Bride’s friend TBoss agreed that their performance as a group was exceedingly good. “For a moment, I forgot it was make-believe. There were moments where I teared up a bit. The negotiations went well and I’ve actually never witnessed traditional wedding negotiations,” she said.

All the other Housemates agreed to a good performance by the group, adding that they looked forward to the wedding reception later.

They had Wagered 100% this week themed #BBWedding.

Biggie had the Housemates up on their feet after Marvis and Efe’s wedding reception and commended them on a lovely event.

“You all put on a worthy show. However, Biggie wonders if you could have done better? The food was late and this delayed the entire event. In fact, you were all late,” Biggie noted.

He minced no words, as he told them that their wedding reception outfits were far below what he had expected. “You should have dressed better to compliment what Heritage Bank started this afternoon. Where are the beautiful clothes PayPorte sponsored you?” he wondered.

All this time, anxiety was written on some of the Housemates’ faces, as Biggie continued, “Big Brother felt not all Housemates participated fully and wonders if you could have done more.” 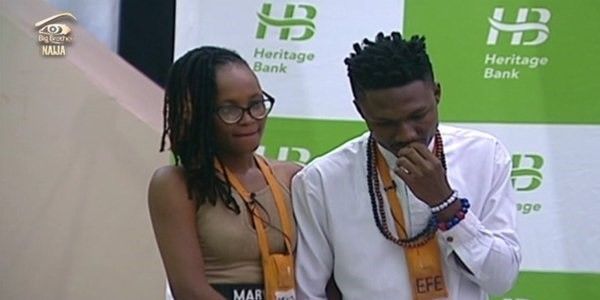 He then asked them how they would rate their performance and HoH ThinTallTony spoke on behalf of his fellow Housemates, saying they felt they had performed well.

Biggie continued, “Big Brother had gifts for you on this occasion but has decided against all these gifts. Big Brother thinks there’s only one befitting gift, that is, your Wager. Housemates, you have won your Wager!,”

The Housemates jumped and screamed with excitement, after minutes that seemed like hours, waiting for Biggie to tell them whether or not they had won their Wager. A few hugs were shared among them, with Biggie congratulating them thereafter.

Biggie then informed that he did however, have a special gift for one Housemate and further asked them to select one Housemate they felt should receive the gift. The Housemates chose the birthday girl, TBoss, who was informed that she could pick one item of her choice in the Arena. She picked an alcoholic beverage, much to the excitement of the rest of the Housemates. 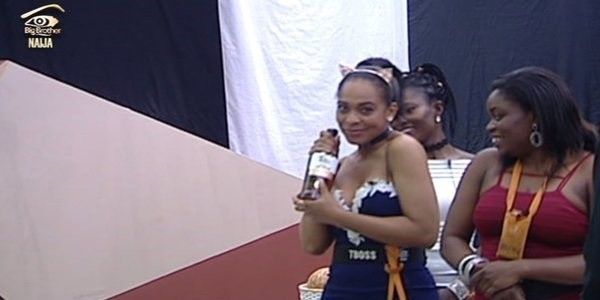 Beyoncè’s Fans are the Best! Brazillian Artist makes a Pregnant Barbie-like Doll in honour of her Grammy Performance