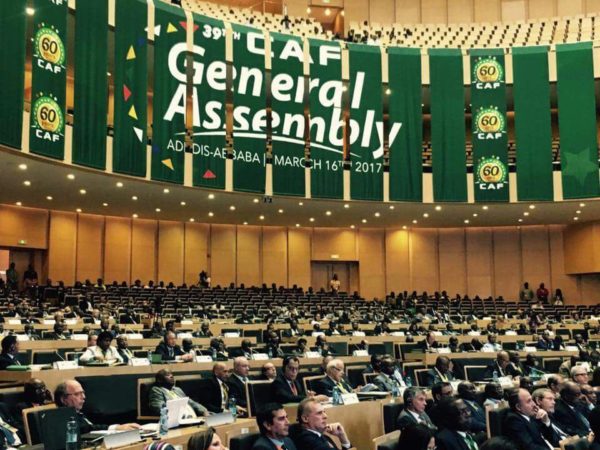 Amaju Pinnick, President of Nigeria Football Federation (NFF), on Thursday won a place on the Confederation of African Football (CAF) Executive Committee for the 2017 to 2021 cycle.

Pinnick won 32-17 to beat the President of the Football Association of Benin Republic, Anjorin Moucharafou, to the West B Zone seat.

Pinnick’s election makes him the third Nigerian ever to sit on the CAF Executive Committee.

Both elections were part of the elections held in the Nelson Mandela Hall of the African Union (AU) building in Addis Ababa, Ethiopia.

The elections were held at the 39th CAF Ordinary General Assembly.

The elections were witnessed by FIFA President Gianni Infantino and Secretary-General, Fatma Samoura, and were declared open by President Mulatu Teshome of Ethiopia.

Also elected into the CAF Exco was Fouzi Lekjaa of Morocco who thumped incumbent Mohamed Raouraoua of Algeria 41-7 for North Zone.

Musa Bility of Liberia defeated Amadou Diakite of Mali 26-22 for West A Zone, while Adoum Djibrine of Chad was elected unopposed from the Central Zone.

For the Central-East Zone which had four candidates, Suleiman Hassan Waberi of Djibouti polled 20 votes to win after Sudanese Magdi Shams El Din withdrew before the second round of voting.

In the first round, the incumbent El Din had got 12 votes, while Juneido Basha Tilmo of Ethiopia got 9 and Moses Magogo of Uganda got 7.

After the Southern Zone election, Ahmad and Suketu Patel of Seychelles were replaced by Danny Jordaan of South Africa (35 votes) and Rui Eduardo Da Costa of Angola (25 votes).

Frans Mbidi of Namibia could not make it in spite of getting 24 votes, while Patel withdrew from the election.

In the election for the female slot, Isha Johansen of Sierra Leone got 35 votes to beat Lydia Nsekera of Burundi who had 12.

In the election of the African representative for the FIFA Council for the cycle 2017 – 2021 (Arabic, Portuguese, Spanish Category), Tarek Bouchamoui of Tunisia was successful.

This was after Hani Abo Rida of Egypt had withdrawn from the contest.

In the Francophone Category, Omari Constant Selemani of DR Congo got 35 votes to beat Augustin Sidy Diallo of Cote d’Ivoire who had 19 votes.

The Anglophone Category election saw Kwesi Nyantakyi of Ghana polling 33 votes to beat Leodegar Tenga of Tanzania who had 20 votes.

In the Open Category, where there were three positions to fill, Almamy Kabele Camara of Guinea and Lydia Nsekera were elected.

500 Startups’ “Geeks On A Plane” is Here! Get the Scoop on the Various Events Happening in Lagos, Accra, Johannesburg & Cape Town