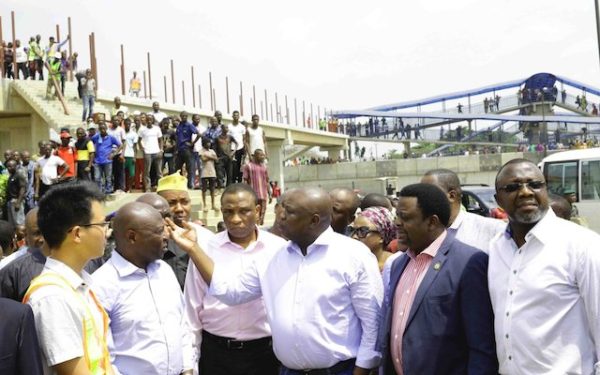 Governor Ambode inspects one of the projects in Lagos

Governor Akinwunmi Ambode has accused the Federal Ministry of works headed by his predecessor, Babatunde Fashola of frustrating his government’s plan to rebuild the Oshodi – Murtala Muhammed Airport Road.

It was an accusation least expected, because Fashola as governor of Lagos also complained that the Federal Government refused to hand over the road to the state.

The airport road was one of the three major complaints of Ambode on Wednesday.

He also said Fashola’s ministry has failed to hand over the Presidential Lodge in Marina to the state, six months after President Muhammadu Buhari gave the order.

His third grouse was that the Federal Government has failed to refund the N51 billion that the state had spent on Federal roads, over the years.

“Lagos State is ready to take over and reconstruct the road, if given approval by the Federal Government and hit the ground running in two weeks,’’ Ambode said about the airport road.

The governor, while briefing newsmen in Alausa after an inspection tour of ongoing projects across the state, described the road as a “national embarrassment”.

He also urged the Federal Government to either allow his administration carry on with the project or pay part of the over N51 billion owed for the rehabilitation of Federal roads in the state.

According to him, this government sees the state of that Airport Road as a national embarrassment.

“As such, we ensured that we got the House of Assembly to approve a budget to reconstruct the road into a 10-lane road, with interchange and flyover to drop you at the Local Airport.

We have the money to do it and we shall accomplish it.

It is no news that the Federal Ministry of Works and Housing owes Lagos N51 billion.

All we are saying is allow us to reconstruct this road, because, we have the resources and capacity to do so.

Then, make the deductions of what we might have spent from the lump you owe us. I think this is only logical,” he said.

The governor said that the government could also take up the responsibility of constructing the road and finish it in six months which could also form part of the state’s 50 years celebration.

Ambode also appealed to relevant agencies to quickly hand over the Presidential Lodge in Marina and other Federal Government-owned property which President Muhammadu Buhari had released to his administration verbally.

On the proposed 4th Mainland Bridge, Ambode said that the current downturn in the nation’s economy had delayed its commencement.

He promised that the ground breaking ceremony would be carried out in the next four months.

During an inspection of the Abule-Egba four lane-fly over, the contractor handling the project, Mark Robertson of Craneburg Construction Company, assured the governor that the work will be completed by the end of April.

Ambode, who also inspected the reconstructed Berger Roads in Ojodu and the Aboru-Abesan Link Road, expressed satisfaction with the level of the projects, said to be at 85 per cent completion.

On the Presidential Lodge, Ambode said: “As we speak, we are yet gain entrance into that place. It’s frustrating our programme. So, I want to use this medium to appeal and say that the approval of Mr. President should be rightly honoured and the agencies concerned, that is the Federal Ministry of Works and Housing and the Security Services, should honour that promise by Mr. President.”

The Ojodu Berger regeneration project, the Abule Egba Flyover Project and the Aboru Abesan Link Road are to be inaugurated as part of the state’s golden Jubilee celebrations.

Ambode said compensation had been paid to owners of properties that had to give way for the Oshodi and Ojodu Berger regeneration projects. Property owners at Abule Egba are also to get their’s within the next four weeks, he added.