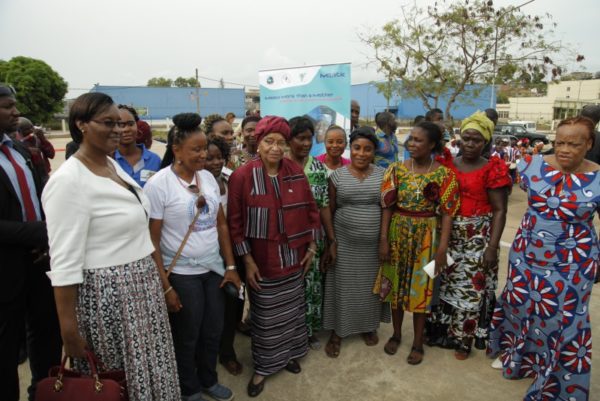 H.E. Madam Ellen Sirleaf (centre), the President of Liberia and Hon. Julia Cassell, Minister for Gender, Children and Social Protection with some of the infertile women who have been supported through ‘Merck More than a Mother’s’ ‘Empowering Berna’ Project

Merck, a leading science and technology company launched the ‘Merck More than a Mother’ and ‘Merck STEM for Girls and Women’ program for the first time in Liberia.

The launch took place on Wednesday as part of the organisation’s commemoration of International Women’s Day.

‘Merck More than a Mother’ will empower infertile women in Liberia through improving access to information, health, change of mindset and economic empowerment.

‘Merck More than a Mother’ was first implemented in Kenya in 2015 followed by Uganda, Nigeria, Tanzania, Ghana, Cote D’Ivoire and Central African Republic in 2016. In Liberia both ‘Merck More than a Mother’ and ‘Merck STEM’ program are in partnership with the Ministry of Gender, Children and Social Protection and the Ministry of Health and Social Welfare.

“Today we are recognizing the International Women’s Day by starting this very critical campaign for Liberia with the aim to empower an under-privileged segment of women. Women who couldn’t bear children and for this they are discriminated and mistreated by their husbands, families and communities. In some cultures, childless women still suffer discrimination, stigma and ostracism. This is unacceptable and has to change through our campaign,” said Rasha Kelej, Chief Social Officer, Merck Healthcare.

“We will also start ‘Merck STEM’ Program which will contribute towards the social and economic development of Africa through empowering women and girls in the fields of science and technology where they are currently under-represented, starting today with 140 girls at Victoria Tolbert School,” Rasha Kelej added.

The Liberian Minister of Health and Social Welfare, Bernice Dahn emphasized during her speech at the launch: “We are happy to partner with reputable and innovative company such as Merck. We believe that raising awareness about infertility prevention and improving access to regulated and equitable fertility care are very important, but it is even more important to intervene to break the stigma around infertility and infertile women in particular.”

Julia Cassell, Minister of Gender, Children and Social Protection emphasized: “In Liberia the infertility rate has increased due to the 40 years of civil conflict where women and girls were raped resulting in traumatic fistulas and the removal of their uterus to save their lives. Over 50% of these women and girls are now infertile. Harmful traditional practices such as female genital mutilation which is widespread in our country is also a major factor causing infertility as a complication.”

“As a Ministry we have made a decision to collaborate with ‘Merck More than a Mother’ to help these women so that they are not stigmatized and discriminated against just because they are infertile and so that they can be empowered to become productive members of society. We also decided to partner with ‘Merck STEM’ program to empower our girls in STEM. This program is very important for Liberia and Her Excellency President of Liberia, Ellen Johnson Sirleaf is very interested to make this program a great success,” Julia Cassell added.

To mark International Women’s Day and in recognition of the important role women can play in the economic and social development of Africa, Merck is empowering women and girls to participate in STEM where they are currently under-represented, through the ‘Merck STEM Program’.

Merck has inaugurated their initiative at Victoria Tolbert School where they equipped their library with computer and science labs to encourage young girls to study science and technology as part of their ‘STEM for Girls and Women’ in Africa.

STEM Project by Merck is the first external support Victoria Tolbert School gets since their establishment by Madam President of Liberia for underprivileged and vulnerable girls.

Related Topics:MerckMerck More than a Mother
Up Next