With a reported death toll of a total of 346 people and 3,145 infected since the outbreak of Cerebrospinal Meningitis in Zamfara, it is very sad to hear that the vaccines allocated to the Bungudu Local Council area of the state have been stolen.

Meningitis is an acute inflammation of the protective membranes covering the brain and spinal cord caused by infection with viruses, bacteria or other microorganisms, and less commonly by certain drugs.

According to Vanguard, two officials – the local council’s Director of Health, Rabiu Dansadau and the Councillor of Health, Sanusi Umar have been ordered to produce the missing vaccines or be sanctioned.

The Chairman of the State Sub-Committee for the Procurement, Management and Distribution of Meningitis drugs and vaccines, Aliyu Kagara said on Monday in Bungudu that the committee had discovered massive diversion of the vaccines meant for the area when only 30 of the total of 400 I.V injections meningitis vaccines allocated to the area were accounted for.

The two officials must return the drugs and offer a convincing explanation of what happened. So far, the affected officials have failed to give satisfactory explanations as to the whereabout of the remaining drugs. The patients had a week ago told Governor Abdulaziz Yari when he visited some meningitis isolation centres that they used their money to buy the drugs which were supposed to be free.

Patients pay up N1,000 per vaccine, to get treated. The governor has already set up a committee under the Secretary to the State Government, Professor Abdullahi Shinkafi to investigate the matter, while the State House of Assembly has also set up its own investigation committee.

The missing vaccines were also reported by social media users on Tuesday. 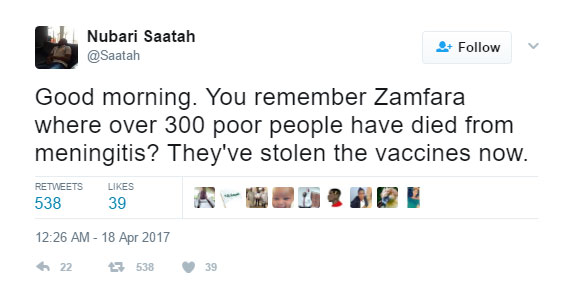 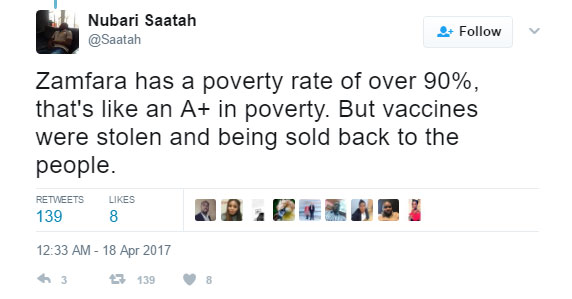