A Facebook user Curtis in a post shared tips for ladies who are going on a date with a man for the first time.

“Ladies…ladies…let me give you (some) tips. If a man offers to take you out on a date for the first time, don’t get in the restaurant ordering s–t YOU wouldn’t normally buy yourself. $20 Martini’s and $30 plus entrees, you know damn well you wouldn’t typically get that unless it was your damn birthday lol…Some of you just run the hell out I swear. SMH,” Curtis said.

The story gets interesting after Chelsea, who was on a date with Curtis recently, and probably felt his post was about their outing, gave her own side of the story. She wrote under Curtis’ post:

Fun 6 facts! I got time today I’m tired of being nice. But I had to address this ignorance. LET ME GIVE YOU SOME TIPS Curtis.

1. My meal was only $28.37 AND I PAID FOR MY OWN MEAL
2. I was nice enough and considerate enough to pick you up. It wasn’t that serious.
3. I picked you up because you got a dui and can’t drive
4. You been asking out for months and I finally said yes
5. You chose the restaurant, you should’ve chosen an even cheaper place if you could not afford it
6. Tip for you: Next time think twice because you do this again. 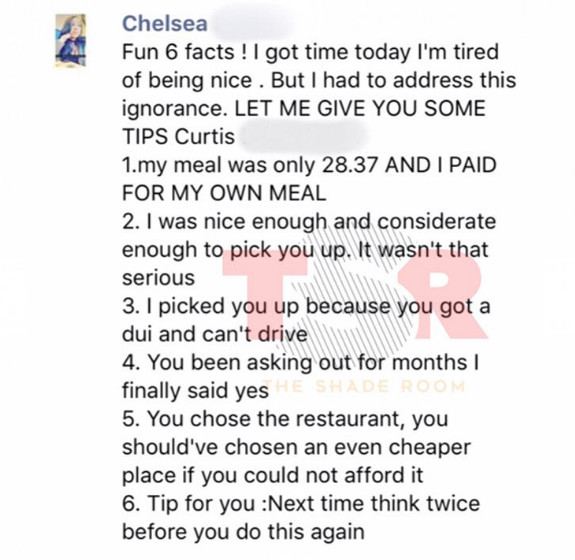 Curtis replied Chelsea with this: “Me can’t afford? Common now, everyone knows better than that. As far as the other stuff goes, it’s self explanatory.”

Well, Chelsea was not having any of that, so she shared the receipt from the restaurant, showing that she paid for her meal. “You are a liar and a joke, next time come correct,” she wrote. 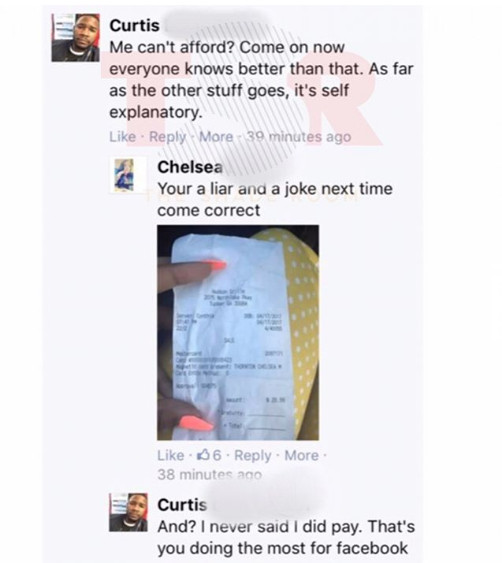 After this was posted, Curtis replied: “And? I never said I did pay. That’s you doing the most for Facebook.”

Curtis had an explanation for everything that happened, and here it is: 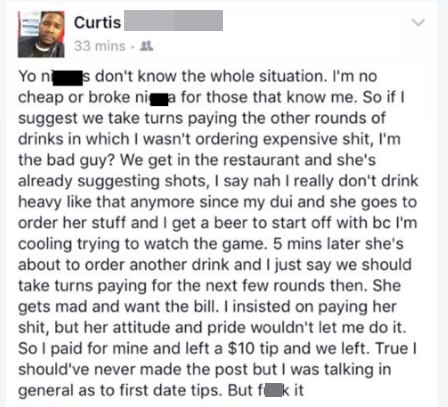