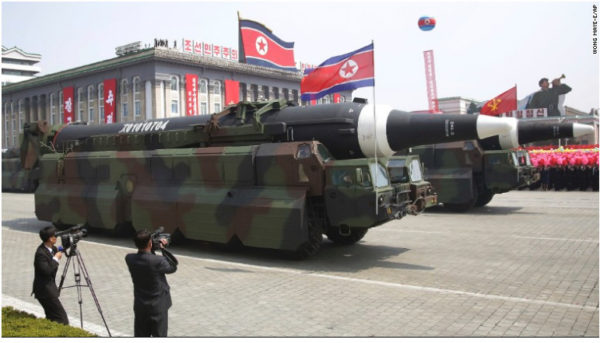 North Korea celebrated the 105th birthday of the country’s late founder, Kim Il Sung, by rolling out intercontinental ballistic missiles and other military hardware at a massive parade on Saturday with third-generation leader Kim Jong Un looking in delight.

The birthday celebration of Sung who is Kim Jong Un’s grandfather took place amid concerns that North Korea is possibly preparing for its sixth nuclear test or a significant rocket launch, such as its first flight test of an ICBM.

According to ABC News, the state television showed Kim, wearing a black suit and white shirt, stepping out of a limousine and saluting his honour guard before walking down a red carpet. Moments later, he then stepped up to a podium and clapped with senior government officials to address the thousands of soldiers and civilians taking part in the parade at Kim Il Sung Square in Pyongyang, the capital.

State television showed several KN-08 and KN-14 missiles rolled out on trucks at the parade with Military analysts stating that the missiles are capable of hitting targets as far as the continental United States.

Other military hardware at the parade included tanks, multiple rocket launchers and artillery guns, as well as a solid-fuel missile designed to be fired from submarines. Military planes flew in formation, creating the number “105” above Kim Il Sung Square.

Choe Ryong Hae, believed to be the second-most powerful official in North Korea, criticised the new U.S. government under President Donald Trump for creating a war situation on the Korean Peninsula by dispatching strategic military assets to the region He added that the country is ready to stand up to any threat posed by the United States.

Kim, who took power in late 2011, emphasises nuclear weapons as the foundation of his national defence strategy. The country under his watch has been aggressively pursuing a goal of putting a nuclear warhead on an ICBM capable of reaching the continental United States.