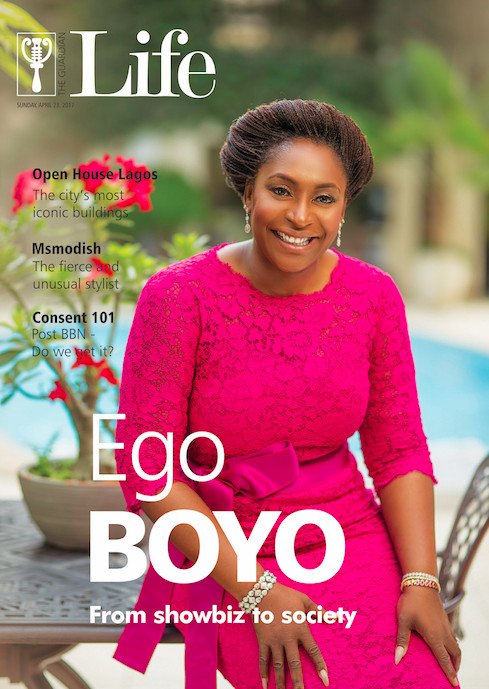 Veteran actress Ego Boyo is the cover star for the latest issue of Guardian Life magazine. The cover was unveiled a couple of days ago and now we have more insight into her chat with the magazine.

In her interview with Guardian Life magazine, she talks about how she got into acting, her role as the President of International Women’s Society, her new project she’s working on and more.

On how she got into acting: I think from the very beginning I was always sort of a performer, I was known for putting on little skits and playacting all the time. It wasn’t a stretch when I decided to go into acting and eventually into filmmaking, it was always a part of me. I enjoy acting, it is something that I have a passion for and I will always love it, in terms of careers I like being behind the camera more.

On the progression of the Nigerian film industry: The idea is to continue to strive for quality in all our productions…everybody has a comedy out. There are many other parts or genres we can focus on. I think we have done so well, but I think we can do much more.”

On taking the role as President of the IWS: I had a clear vision of where I thought the society needed to go and I thought I was in the position to be able to move them to that point and I had great support from all the ladies. When you’re President, you can’t leave, you have to stay from the very beginning to the very end. Then you have to be part of the decision-making, you are involved in making sure progress is made.

On the importance of each project as a method of empowerment: For the widows, we don’t just give them money to pay off the bills; we give them sustainable plans to take care of themselves. They tell us what business they want to get involved in and we empower them by giving them funding and direction. While the children from nine months to five years are imparted with education, the skill centre offers a variety of vocational skills from adult literacy to computer literacy skills. In Nigeria and other parts of the world, girl child education has been identified as being endangered… and since our organisation focuses on women and children it is an area I would like to highlight.

On her next project: The film will always be my day job; it is my passion and what I do. I am able to work on that and on the Presidency and IWS as well. I have the wonderful women in the committee who take on the roles of chairpersons and I oversee all of that and seek support from other organisations. I am able to do that and still do my film business. I have a project coming out, it’s a short film called A hotel called Memory. It was directed by Akin Omotoso and stars Nse Ikpe Etim.

Debbie Larry-Izamoje: Letter To My 22 Year Old Self