Former Spice Girl and renowned designer Victoria Beckham couldn’t hide her excitement as she received an OBE from the Duke of Cambridge, Prince William during an investiture at Buckingham Palace in London on Wednesday. 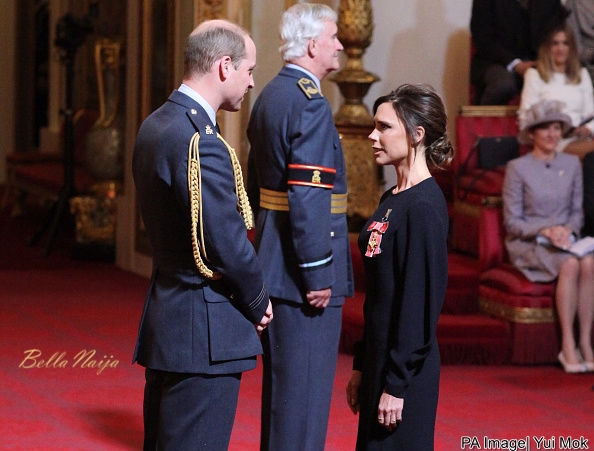 The mum of 4 was supported by her mother Jackie Adams and her husband David Beckham.

In September 2014, Victoria became a UN goodwill ambassador for an AIDS charity. She is also a patron of the Elton John Aids Foundation.

According to The Sun, she spoke of the difference she hoped to make in her role for the UN;

“I am mother and I am a woman. I will do whatever I can to raise awareness. I feel very passionate about this. I recently visited South Africa and was so touched by the women I met and felt inspired. I came home and I knew I had to do something. It’s taken me to get to 40 to realise I have a responsibility as a woman and as a mother.

[Sir] Elton [John] is a very dear friend of mine and David’s and we’ve been patrons of the Elton John Aids Foundation for 20 years so I have been working a lot with lots of AIDS charities. It’s why I realise I have to step forward and do whatever I can do. I want to get to know the women and understand them. It was life changing when I want to South Africa,” Victoria said at the press conference in New York.