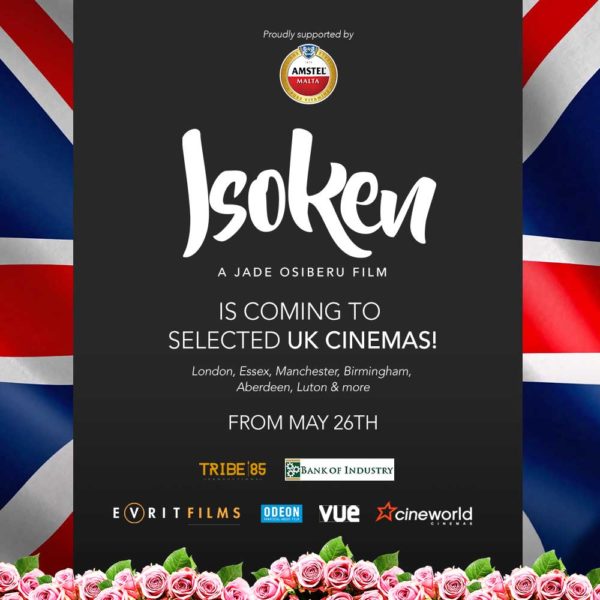 In a first of its kind film distribution deal, Jade Osiberu’s debut film ‘Isoken’ will be showing in 12 cinemas in the UK from May 26th, 2017.

UK-based film distribution company Evrit Film, which specializes in film distribution to all major cinema chains across the UK and Europe, inked the deal with Tribe85 Productions earlier this year, with an international red carpet premiere at London’s Leicester Square’s Cineworld cinema.

Isoken, which was financed by the Bank of Industry, will be premiered on Wednesday, May 24, 2017 at Cineworld, Leicester Square (7:00pm) with cast members Dakore Akande, Funke Akindele, Joseph Benjamin, Lydia Forson, Damilola Adegbite-Attoh, Marc Rhys, Bolanle Olukanni and the creative mind behind this movie, Jade Osiberu, in attendance.

Speaking on this partnership, Henry Kwao, Managing Director, Evrit Films stated “We reached out to Jade Osiberu as soon as we saw the trailer for the film. The quality of the film was undeniable and we recognized a story that would resonate with the African diaspora demographic. The feedback we received after screening the full film with bookers from the major cinemas in the UK has been unprecedented and we are confident the film will do really well in our selected cinemas.”

This much anticipated and soon to be released movie is proudly sponsored by Nigeria’s Foremost Premium Less Sugar Malt Drink – Amstel Malta. Speaking about the sponsorship, the Senior Brand Manager – Amstel Malta, Nigerian Breweries Plc, Chidike Oluaoha said, “Amstel Malta is the Premium Quality Non-Alcoholic Malt Drink that believes in the great talent of the average Nigerian and inspires these talents (such as Jadesola Osiberu) to be the best they can be.

Written, Produced and Directed by Jadesola Osiberu, Isoken is a story of self-discovery of a single and successful unmarried 34-year-old woman. It explores cultural expectations, racial stereotypes and bonds that unite families in touching, dramatic and often hilarious ways.

ISOKEN will be showing in the following UK Cinemas from May 26:

Check out the trailer below…