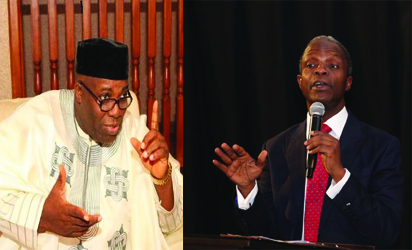 Doyin Okupe, a former media aide to former Presidents Goodluck Jonathan and Olusegun Obasanjo, has reacted to a statement made by Acting President Yemi Osinbajo over the need for hard work for national growth.

“No matter how much you pray and fast, our country cannot grow without some of us deciding to do the hard work that makes nations work,” Osinbajo had said while speaking to mid-level civil servants on Wednesday.

“Great economies and great nations, prosperity and abundance of nations and communities are created by men and not spirits,” Osinbajo added.

Okupe quoted the statement which was also posted on Twitter and said: “I beg to disagree with VP (Osinbajo). Yes there is no substitute for hard work but that alone can’t make a Nation great. But God, fasting & prayer certainly will.”

Okupe buttressed his point in a series of tweets. See below:

We can neither limit d extent of God’s power nor can we compartmentalize his area of influence. God is sovereign. He can do any and all things.

2 Kings 3:17 KJV For thus saith the Lord , Ye shall not see wind, neither shall ye see rain; yet that valley shall be filled at water.

#UnboxYourPhoneNG: Purchase your Samsung Galaxy S8 or S8+ Now and Get a Free Clear View Standing Cover | Offer Valid Till May 31st