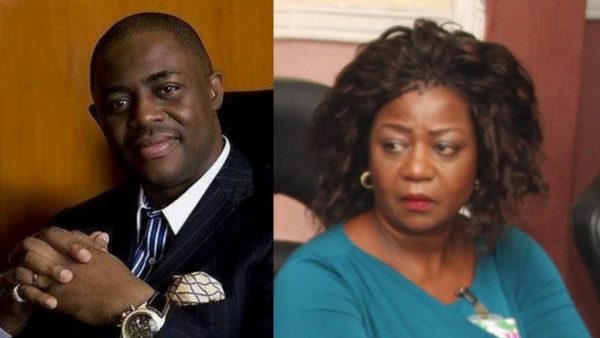 PA to President Muhammadu Buhari on Social Media, Lauretta Onochie yesterday took a swipe at former Minister of Aviation, Femi Fani-Kayode (FFK) for his jokes about VP Yemi Osinbajo‘s comment that President Buhari treats him “like a son”. Reacting via her Facebook account, she said:

MUST FFK SPEAK ON EVERYTHING?
Commenting on everything is an indication that there are some loose nuts, upstairs.
Acting President Yemi Osinbajo saying Muhammadu Buhari treats him as a son and a friend, has become a source of anger and anxiety for Femi Fani-Kayode, alias #FFKFood4Dance

But who can blame him? He cannot understand father/Son relationship, respect, decency & loyalty. No he can’t. He doesn’t posses the capacity to even begin to comprehend any sort of relationship. None!

According to his former boss, Pres. Olusegun Obasanjo, all he understands is the correlation between looted Food and his mouth. Give him some looted yam and he will dance. Till the loot runs out….

#FFKFood4Dance and his co-mischief makers, cannot, no matter how they try, put a wedge between our two leaders. The bond that holds our leaders together, is not personal. It’s their shared commitment to Nigeria and Nigerians.

It won’t be broken by those who speak and act as if they are on the white stuff.

FFK was having none of that and proceeded to reply via his own official Facebook page thus:

There is an ugly duckling that washes toilets in the Villa called Loretta who is running her mouth. Truth is I don’t respond to hired help especially when they look like a used tampon. For me to respond to such an ugly, lousy and shallow creature she would first need to get a facelift and then a big promotion. Let the walking corpse that she works for wake up and speak for itself. Then I will respond.