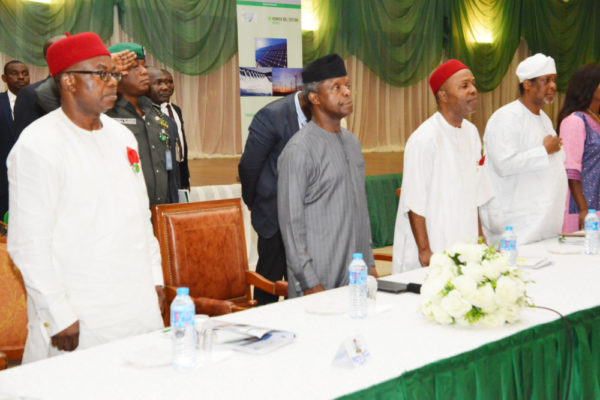 The Federal Government has vowed to render operators of electricity generating sets in rural areas “jobless” by meeting the energy demands of rural communities through sustainable renewal energy solution.

Acting President Yemi Osinbajo stated this at the inauguration of Nigerian Renewable Energy Roundtable on Tuesday in Abuja.

According to him, already the government through the Rural Electrification Agency is developing an energy database that will show community locations and energy demand profiles.

Osinbajo narrated how the provision of solar energy to Wuna village in the Federal Capital Territory (FCT) rendered the only operator of electricity generating sets jobless.

“I was in Wuna to see it for myself. For the first time in their existence, the village now has running water, solar powered. The school has power and the school hall is now used as a community hall in the evenings. Each home has four points of light.

Children can now stay up and do some studying at night. Many of Wuna’s women can now process their millet and yams at night. New jobs have been created, solar installers, maintenance, payment systems and so on.

One guy has lost his business in Wuna, the phone charger. Every household can now charge their phones. But he now charges phones of residents of other villages,’’ he said.

The acting president revealed that 20,000 more homes will be provided with solar electricity system in the first phase of the sustainable renewal energy solution project of the government.

Osinbajo stated that the plan was to expand the Solar Home System programme to one million households, and thereby “creating a few more million jobs’’.

He disclosed that the government was also championing the use of mobile money for solar home system payments to provide access to lighting and electric power for small devices.

He added: “The Wuna home solar project is an example of how we can creatively and aggressively provide power to our people by this pragmatic approach to our energy mix.

“We are convinced that renewable energy probably offers us the most sustainable means of increasing energy access to those who have no electricity and have no immediate hope of being connected to the National grid.”

The acting president also revealed that the government would embark on a broader restructuring of the electricity sector and strive to achieving a more systematic development power market design especially for the renewable energy.

He, therefore, stressed the need for a framework that would bring together all stakeholders towards ensuring that “renewable energy becomes a real engine of growth for the Nigerian economy’’.

The Chairperson, House Committee on Science and Technology, Rep. Beni Lar, disclosed that the National Assembly was working on a bill to amend the Energy Commission Act of Nigeria to ensure more powers for the commission.

According to Lar, the bill also seeks to ensure that community trust funds are set up and the funds will be managed by the energy commission.

She said the commission will partner with communities that needed help in the execution of solar based projects in their areas.