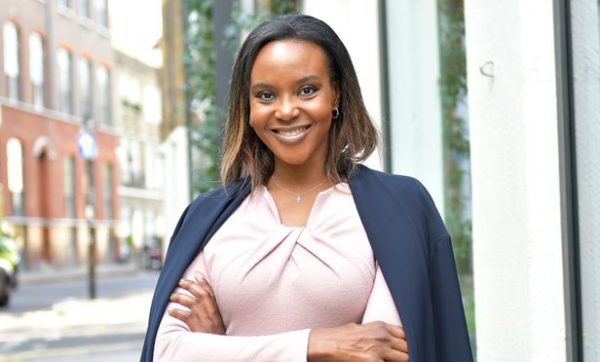 British-Nigerian lawyer Funke Abimbola, 44, has been honoured by Queen Elizabeth II as a Member of the Most Excellent Order of the British Empire (MBE) for her services to diversity in the legal profession and to young people.

Funke was recognised by the monarch in her 91st birthday honours list for 2017.

“I was absolutely stunned when I received an official letter from the Cabinet Office informing me of this in early May but have had to keep this news confidential until now,” Funke said.

“The letter explained that, having taken advice from the Head of the Civil Service and the Main Honours Committee, the Prime Minister needed my permission before submitting my name to the Queen and recommending that I be awarded the M.B.E. It is incredible to think that campaigning for equality in my personal time (having experienced both direct racial and gender-based discrimination myself) and supporting young people to reach their potential has led to me receiving a Queen’s honour.

I am still taking it all in and feel very humbled and proud to be receiving this honour. More than anything, I am extremely grateful to everyone who has supported my journey and played a part in shaping and developing my vision – my parents, my family, friends, teachers, mentors and mentees. Mine has not been an easy path at all and I still face many challenges but I am very thankful for the support and encouragement I have received along the way.

My aim is to use this recognition as an elevated platform to open more doors for under-represented communities and to further advance the equality agenda by demonstrating that we are all bigger than the box that either society or the workplace chooses to put us in. I will be carrying as many people along with me as possible and continue to drive lasting societal change,” she added.

Funke who works as a solicitor, compliance professional and senior leader for one of the world’s largest biotech company, is regarded as the most senior black lawyer working in the UK pharmaceutical industry.

This is not the first honour Funke, who spends a significant amount of her time volunteering to influence and improve diversity, is receiving from the UK government. In October 2016 she was presented with a ‘Point of Light’ award by the Prime Minister, recognising the impact of her voluntary diversity work.

“You have become a role model for thousands of young people, inspiring them to believe that race or gender should not be a barrier to achieving their potential. By speaking so passionately to groups in Parliament, the Law Society and, most importantly, over two thousand school children and university students, you are supporting the professions to become more diverse,” the Prime Minister, Theresa May said in a personal letter to Funke.

Related Topics:Funke AbimbolaMember of the Most Excellent Order of the British Empire (MBE)
Up Next