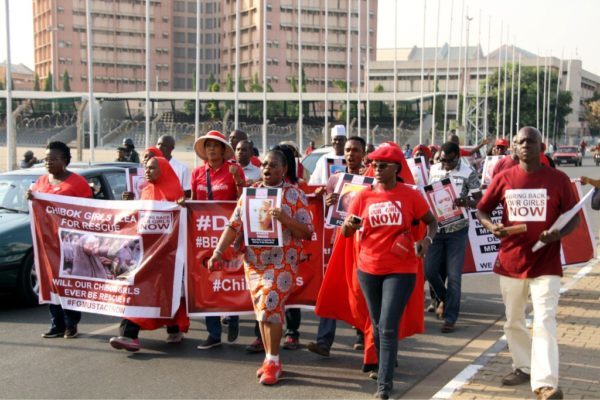 The Bring Back Our Girls (BBOG) Advocacy Group has called on governments at all levels to intensify its efforts in securing the release/rescue of the remaining 113 in captivity in the hands of Boko Haram terrorists and the 6 schoolboys kidnapped from their school in Lagos.

On Saturday, June 24, 2017, it will be 1,167 days in captivity for the 113 Chibok schoolgirls who have not escaped, been rescued, or released.   For many, the negotiated release of 82 girls in May 2017, after more than 3 years since they were abducted, means that the struggle is over and that the #BBOG advocacy was a success.  We appreciate the great efforts the federal, state and local governments are making in the areas affected by conflict. We also salute and appreciate the gains and sacrifices of our members of the police force, civilian joint task forces, local communities, and armed forces.  Nevertheless, the families and communities of the remaining 113 Chibok girls, as well as the families of the uncounted missing men, women and children, anxiously await their return.

On Saturday, June 24, 2017, it will be 30 days in captivity for the 6 Lagos schoolboys abducted from Lagos State Model College, Igbonla-Epe.  We believe the authorities and schools should have learnt many lessons from the school kidnappings that have occurred over the past 3 years at Chibok, Ikorodu, Isheri, Ogun State, and Epe. Also, in this case, the kidnappers sent a threat in advance, but this crime was not prevented. Likewise, in the absence of greater detail, it seems that the response to this second kidnapping in Igbonla-Epe is not as vigorous as the first kidnapping incident when the release of the kidnapped Epe schoolchildren was secured in less than 7 days. Once again, parents, siblings, other family members, and members of the school community have been left traumatised by this event and the lack of resolution. 6 Lagos Schoolboys remain in the unfeeling hands of kidnappers.

Failure to prevent such crimes and delay in the rescue of victims could send a signal to the criminals that there is a major weakness in the capacity and capability of law enforcement competence of the government. As security is the primary responsibility of government, it must not present itself as such which is capable of emboldening other criminals. The government must show the capacity to protect its citizens, apprehend criminals, and bring them to justice in time.

Our movement has a singularity of purpose, and a specific demand, for the government of Nigeria to ‘Bring back our girls, NOW and ALIVE’.  The Chibok Girls, whose names and identities we know, symbolise all Nigerians who have been abducted by terrorists and we demand that the Federal and State Governments fulfil their constitutional responsibility of securing the life of every Nigerian. This, naturally, includes the Lagos 6.

We reiterate our demand and request that the Federal Government work with the other two tiers – local and state governments – to:

We are not asking the government to do it alone. SOME of our BBOG members who work in the humanitarian space alongside other Nigerians are intervening in the North East and other parts of Nigeria to support IDP camps and terrorism-affected communities.

BBOG is also aware of various advocacy actions against people trafficking for the purpose of street trading, fundraising for humanitarian support for victims of conflict around the country, counselling for trauma victims, amongst others.

Painfully, #Day1167 for the Chibok girls and #Day 30 for the Lagos boys is on Saturday, June 24, 2017.  It is well overdue to bring these horrific sagas to an end.  What if it were YOUR CHILD? What would you do?  We enjoin ALL NIGERIANS wherever you are to join our movement in whichever small way you can. Attend a sit-out in Abuja, Lagos, or Oshogbo.  Form a group and visit your local government chairperson. Write to your Representative or Senator.  March to your Governor and State House of Assembly.  Engage your local religious leader to mention this issue to your community during service. Engage local and international influencers to put pressure on our authorities. Put pressure on the federal and state ministries of education to improve their performance. Support and encourage our police and our troops however you can, even if only with some words of, “Well done”

We request that the Federal Government, Lagos State government, the Lagos State Commissioner of Education, and the Federal Minister of Education widely communicate their plans and responses to let citizens know what steps they are taking to secure our lives, rescue and rehabilitate the kidnapped, and provide conducive environments for learning in safe and hygienic conditions.