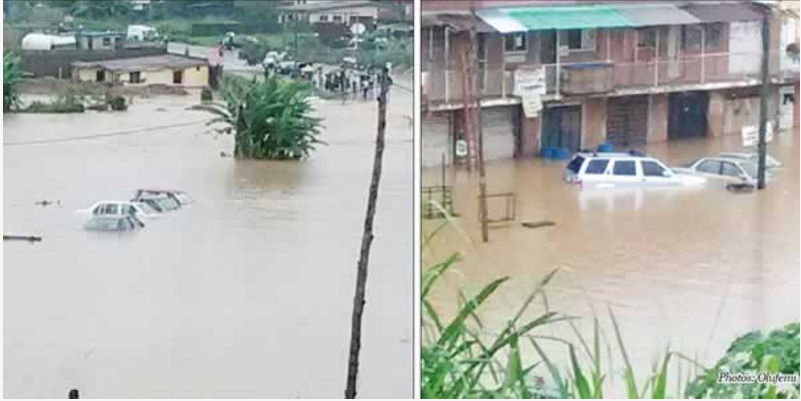 Submerged Houses and Cars in Ibadan

Due to the heavy downpour that started on Monday through the late hours of Tuesday morning, many houses, church buildings and cars in Ibadan have been submerged in flood.

The areas affected are said to be the ones closest to the river, and they include Orogun, Akinyele, Onipepeye on Old Ife Road, Dandaru Junction on Mokola/UCH Road and Olodo.

According to punch, many people were trapped in their houses, cars parked were washed off or submerged.

The Public Relations Officer of the Oyo State Command of the Nigeria Security and Civil Defence Corps (NSCDC), Oluwole Olusegun, said that “due to the heavy rain in the early hours of today (Tuesday), many rivers overflowed their boundaries. The officers and men of the NSCDC, led by the state commandant, John Adewoye, cordoned some roads off in order to rescue people.”

“Some people were, however, adamant on staying in their homes until the water subsided,” he added.

The people in these buildings are said to have taken to the rooftop, or simply stood on higher floors or platforms for safety.

The residents have attributed this incident to the lack of proper drainage system saying that since the government sacked the waste management companies, no replacement has been made.

They have also called on the government to enforce the state’s environmental laws.

Many people are complying with environmental laws in the state now. We started preparing for this in December 2016 through a World Bank assisted project. Fourteen rivers and streams were dredged. This year, we have dredged 36 streams and rivers.

This cannot be repeated every year because it is just a palliative measure. That is why we are working on three master plans for Ibadan that will take care of this issue.

The attitude of our people is responsible for this flooding. They have refused to obey the setback rules and instead, they build houses on river channels. It puts pressure on the drainage channels.