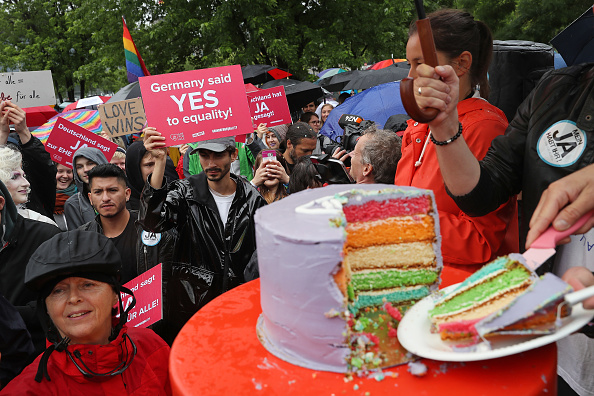 BERLIN, GERMANY – JUNE 30: Supporters of gay rights gathered outside the Chancellery cut a cake to celebrate a vote at the nearby Bundestag in which parliamentarians approved a new law legalizing gay marriage in Germany on June 30, 2017 in Berlin, Germany. In a historic vote following emotional statements by parliamentarians both for and against the issue Germany is transferring homosexual relationships from a privileged partnership to marriage with the same rights as marriage between heterosexual couples.

Under an amendment tagged “Marriage for all,” the German parliament has passed a law legalizing same sex marriage, granting full rights to gay couples, including rights to adopt a child.

The German legal code has been changed to say “Marriage is entered into for life by two people of different or the same sex.”

The bill was approved by the upper house, after the lower house passed the bill by a margin of 393-226.

German Chancellor Angela Merkel however voted against the bill, saying, “For me, marriage in German law is marriage between a man and a woman and that is why I did not vote in favour of this bill today.”

“I hope that the vote today not only promotes respect between different opinions but also brings more social cohesion and peace,” she told reporters.