TIERs Releases Report conducted by NOIPolls to Show that Acceptance Rate of Lesbians, Gays & Bisexuals in Nigeria is on the Rise 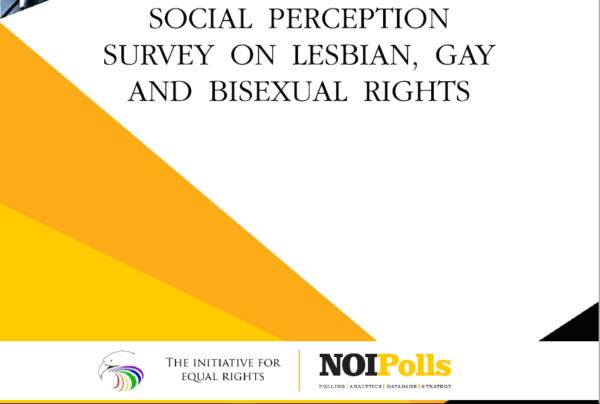 Commissioned by The Initiative for Equal Rights (TIERs), a non-profit organization working to protect the rights of sexual minorities, the report showed a rise in family acceptance from 11 percent in 2015 to 13 percent in 2017. Findings also show that 39 percent of Nigerians now say that Lesbian, Gay and Bisexual persons should be allowed to have access to public services, a 9 per cent increase from 30 per cent of respondents in 2015.

One of the highlights of the report was the fact that 17 percent of respondents answered in affirmative when asked if they know someone who is Lesbian, Gay or Bisexual- a family member, friend, or someone within their locality.

The survey method involved a random nationwide sampling of 2,000 respondents who were interviewed over the telephone. Participants were selected from the six geo-political zones through a proportionate stratified random sample design.

The Initiative for Equal Rights (TIERs) is a Nigeria-based registered non-for-profit organisation working to protect and promote the human rights of sexual minorities nationally and regionally.  We’re committed to bringing about a society that is free from discrimination and harm on the grounds of sexual orientation and gender identity.  We work towards this goal through education, empowerment and engagement with the many publics in Nigeria.  We were founded in 2005 as a response to the discrimination and marginalisation of sexual minorities in both HIV prevention programming and mainstream human rights work.  We currently have 11 full time members of staff and over 50 volunteers peer educators.

Related Topics:Gays and Bisexual RightsLesbianNOIPollsThe Initiative for Equal Rights
Up Next

#BNOutOfAfricaTour – Yay! We Have a Winner to Explore & Enjoy the Beautiful City of Abeokuta