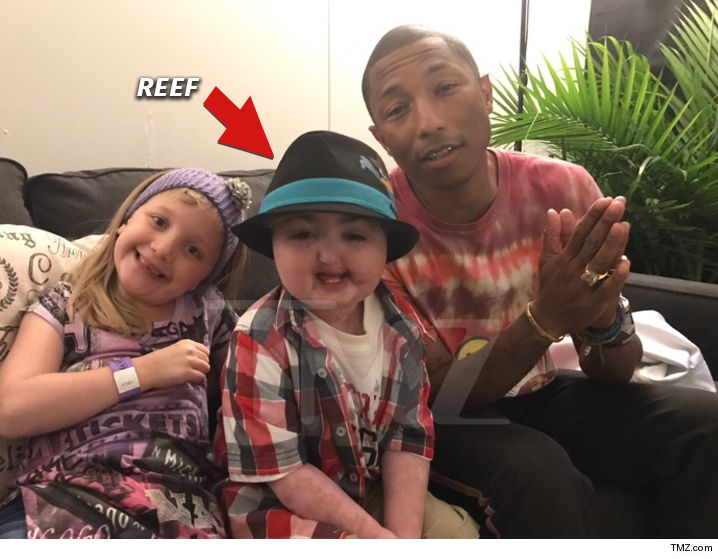 Singer Pharrell Williams granted the wish of 8-year-old child Reef Carneson, who is battling GVHD, graft-versus-host disease. As a result, his immune system is highly vulnerable to infection.

His condition has fluctuated every year of his young life. At 5 months old, Reef was diagnosed with leukaemia and has been in remission ever since. It’s a battle that has taken Reef and his family across the globe.

The Carneson family moved from South Africa to Los Angeles in 2012 to get treatment for Reef. The family then moved to the Cincinnati area for specialised treatment at Cincinnati Children’s Hospital. But Reef got the surprise of his life on Saturday from the famous producer and singer

After meeting Pharrell Williams on a video chat, Reef and his family were treated to a VIP experience at Williams’ show in Philadelphia. Reef could not fly to Philadelphia. His body temperature doesn’t self-regulate, so a climate-controlled environment is essential.

Williams hired a car to drive him to the concert from Cincinnati. Williams also put up the family in a 5-star hotel, bought them tickets and gave them backstage passes.

Williams invited Reef and his sister onto the stage during a performance of his Academy Award-nominated song “Happy.” When he got out on stage, Reef’s mother, Lydia, said the crowd went wild.

“You can just imagine 20,000 people screaming and him going on stage with
his man Pharrell,” she said.

“He spent some wonderful time with Reef, chatted with him and hugged him. It was a wonderful opportunity and a memory Reef will have forever,” she said.

#DammyKrane: “It has to do with Home Training” – Faze says in New Interview | WATCH