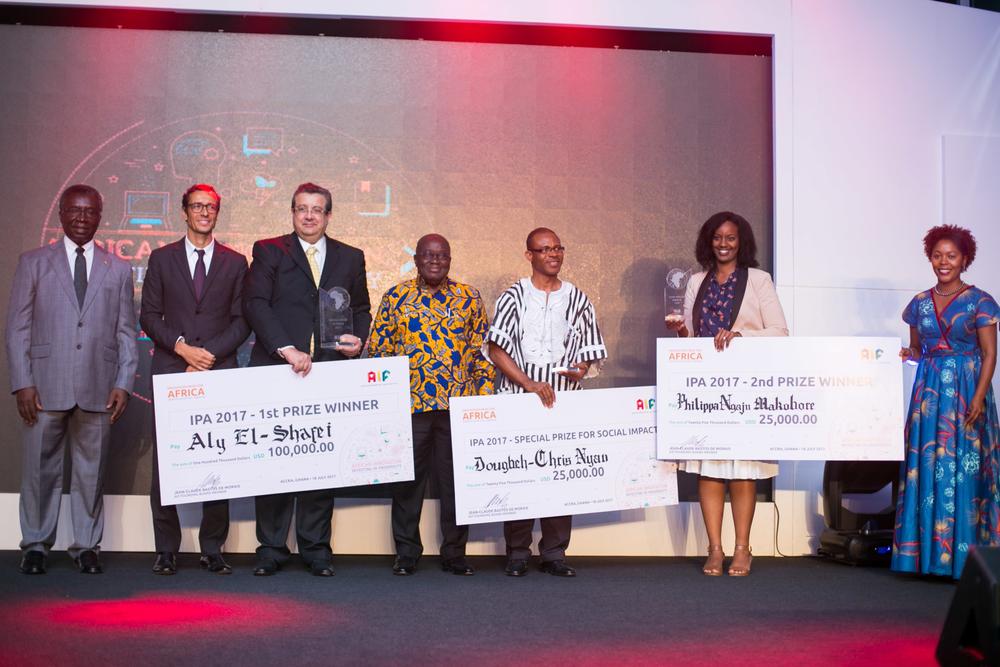 The sixth edition of the coveted Innovation Prize for Africa (IPA) culminated with a bang as the African Innovation Foundation (AIF) awarded three more African innovators for their incredible innovations. Out of the total of over 2500 applications, 10 nominees were selected, and from these Aly El-Shafei of Egypt emerged as the Grand Prize winner, with Philippa Ngaju Makobore of Uganda landing the Second Prize, and Dougbeh-Chris Nyan of Liberia winning the Special Prize for Social Impact. Each one of the seven remaining nominees also went home with US$ 5 000 vouchers to be used to further develop their innovations.

The main obstacle in increasing electricity generation capacity in Africa continues to be the high cost of producing electricity, which is forcing governments to subsidise consumption. El-Shafei’s innovation, Smart Electro-Mechanical Actuator Journal Integrated Bearing (SEMAJIB), is a world-class solution that supports energy generating turbines and can be used to improve efficiency and reduce costs of generating energy in Africa.

AIF Founder, Jean-Claude Bastos de Morais, commented, “This edition of IPA has been all about galvanising support for African innovators in order to mobilise increased investments to help them commercialise and scale their innovations at a greater rate. AIF has rewarded IPA 2017 for developing solutions that can truly add value to the lives of Africans, and I believe that these innovations have incredible commercial potential and will succeed in attracting the right investments to go to the next stage.”

IPA 2017 Chairman of the Jury, Nyasse Barthelemy said that the deliberation was tough as the quality of innovations were high. “Each of the innovations, in their own respective ways, were winners as they represented local solutions to local challenges. It came down to the wire but we believe we have awarded the most compelling innovations this year. We look forward to seeing what comes next for the incredible innovations from IPA2017 innovators and wish them the very best”.

The patented innovation, (SEMAJIB), by El-Shafei who walked away with the Grand Prize of US$ 100 000, is a smart bearing that significantly improves turbine performance in single line combined cycle plants as well as conventional generator technology. Patented in the US since 2010 with another patent pending, the device is designed to be used to support energy generating turbines more efficiently and cost effectively in Africa. SEMAJIB is an innovation that does not currently exist in the West, and already Siemens’ has indicated interest in the device. A world class innovation originating from Africa, SEMAJIB reverse Africa’s image as a technology consumer to technology producer. Production of these bearings in Africa will also generate jobs and increased revenue for Africa.

Electronically Controlled Gravity Feed Infusion Set (ECFG) by Philippa, who bagged the Second Prize of US$ 25 000, is designed to accurately administer intravenous (IV) fluids and drugs by controlling the rate of fluid flow based on feedback from a drop sensor. It is easy to operate and has key safety features, which include alarms for the rate of infusion (rapid or slow), total volume (over or under) and faulty sensors. A battery utilising a hybrid (AC mains and solar) charging bed powers the device. IV infusions are critical for both adults and children in various situations. Over 10% of children admitted to East African hospitals need immediate infusion therapy. Findings from the FEAST trial indicates that over-infusion in children increased the absolute risk of death by 3.3 % at 48 hours. Erroneous delivery rates can result in serious adverse effects. The ECGF has the potential to save lives by providing accuracy and safety at 8% the cost of a brand new infusion pump.

Dougbeh, who was awarded the Special Prize for Social Impact of US$25 000, developed a rapid test that can detect and simultaneously differentiate at least three to seven infections at the same time. His diagnostic test is fast and easy to use in any setting and is able to detect and distinguish multiple infections which bear the same symptoms for instance when a patient has yellow fever, malaria, and Ebola. Whereas most testing methods take three to seven days, this device gives test results in ten to forty minutes. Dougbeh is currently working on the second prototype of his innovation after obtaining positive results from his first prototype. The results have been validated with human clinical samples, peer-reviewed and published in several respected scientific journals such as ‘Nature-Scientific Reports’. His innovation has the potential of being a game changer in the continent in the detection and management of infectious diseases for quality patient-care.

Speaking at the Awards ceremony, H.E. President Nana Addo Dankwa Akufo-Addo, the President of Ghana, commented, “As Ghana marks 60 years of independence, there is no opportune time than now to reiterate our nation’s commitment towards investing in innovation-led growth and prosperity. Our decision to partner with the African Innovation Foundation (AIF) to host the 2017 edition of the Innovation Prize for Africa is a result of our commitment to support African innovation not just at a national but at a Pan-African level. Platforms such as IPA are vital for building stronger synergies amongst key Science Technology and Innovation influencers and stakeholders in Ghana whilst expanding linkages with international partners to promote STI development capacity building, knowledge transfer and forge new partnerships with regional innovation leaders and expand our nation’s innovation footprint.”

The 2017 awards welcomed hundreds of entries from outstanding innovators. For the first time, IPA nominees include innovators from Democratic Republic of Congo, Liberia and Zimbabwe, and featured a stronger presence of women that in any of the years past. The exceptional quality of entrants, finalists, and winners delighted this year’s judges and made for a thrilling awards celebration night.

IPA has seen tremendous growth in applications and increasing interest from both innovators and innovation enablers over the years. To date, IPA has attracted more than 7 500 innovators from 52 African countries, making it a truly Pan African initiative. IPA 2017 edition witnessed a record number of entries from over 2 500 innovators across 48 African countries. The Foundation has supported past winners and nominees with approximately US$ 1 million to move their innovations forward. Due to exposure generated by IPA, past winners have gone on to secure over US$30 million in investments to grow and scale their businesses.