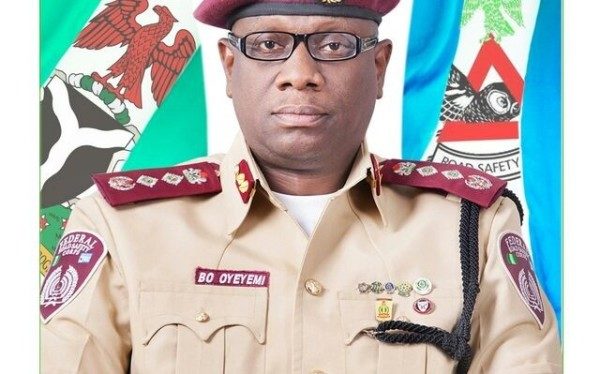 The Federal Road Safety Corps (FRSC) has vowed to bring perpetrators of unprovoked attacks and molestation of its men to justice.

The Corps Marshal, FRSC Boboye Oyeyemi made the vow in a statement issued by the Corps Public Education Officer, Bisi Kazeem, on Tuesday in Abuja.

This came on the heels of Saturday’s shooting of two FRSC officials in Abia by security operatives attached to the Speaker of the State House of Assembly Chikwendu Kalu.

Kazeem quoted the FRSC boss as saying that another official of the corps was unlawfully detained in a police facility after the shooting in Abia.

The statement came with a catalog of recent attacks on FRSC personnel in the FCT, Jigawa and Oyo states between July 12 and 15.

Oyeyemi said all the attacks had been collated and documented, and will be brought to the attention of all relevant arms of government for necessary action.

Many road users are abusing the civility of the unarmed personnel that are trained to be cautious while discharging their legitimate duties.

In the past, many FRSC operatives had been abducted, killed, assaulted, ran over, threatened and shot.

It is also disheartening that some of the attackers misinformed the unsuspecting public by releasing manipulated information to gain public sympathy.

Attempts are often made to make the aggressors look like the victims. Enough is enough. The Corps will not leave any stone unturned to prosecute all those involved in the recent spate of attacks.

The Corps Marshal, who stated that additional steps were being taken to further protect staff performing their legitimate duties, urged them to continue to discharge their duties without fear or ill-will.

According to him, the hall mark of gallant operatives is never to be deterred by negative influences but focused in the commitment to service for the sake of posterity.

He appealed to all sister security operatives and the general public to always come to the aid of the FRSC marshals when they are under threat.

“If the laws are not strictly enforced, road safety becomes the first casualty. Nobody knows the next victim,” Oyeyemi said.

The Newest TV Breakfast Show ‘Wake Up Nigeria’ is set to give you the best of Fashion, Food, Comedy, Celebrity gist & lots more