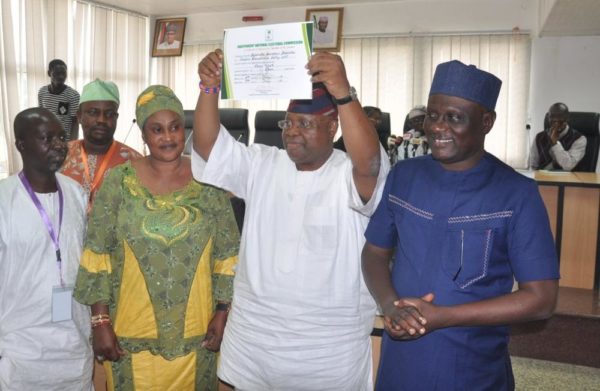 The Independent National Electoral Commission (INEC) has presented the Certificate of Return to Senator-elect Ademola Adeleke after he was declared winner of the July 8, 2017 bye-election.

Adeleke ran for the office under the platform of the People’s Democratic Party (PDP).

The seat was declared vacant after Adeleke’s elder brother Isiaka Adeleke died under mysterious circumstances a couple of weeks ago.

Ademola Adeleke is the father of singers Shina Rambo and B Red and the uncle of superstar Davido.

Adeleke became a viral sensation when a video of him dancing to celebrate his win surfaced online. Did you miss it? See here.

Jumia Food is the way to go! Get FREE Delivery for all First Orders in Port Harcourt | Valid till August 13th