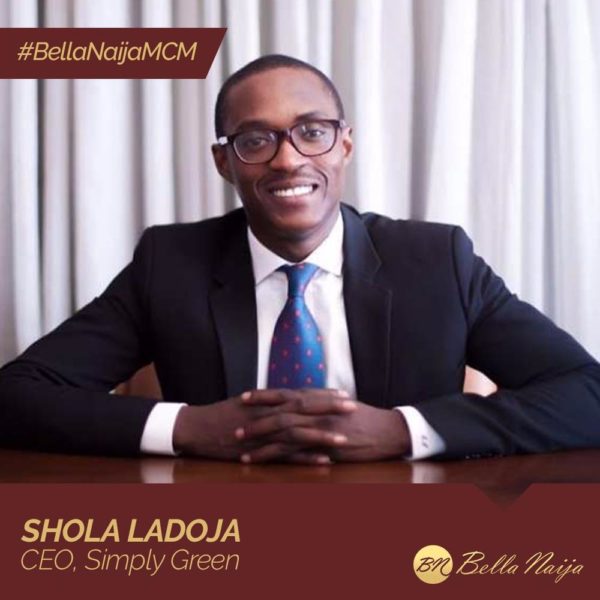 A lot of times, we are tempted to think entrepreneurship has to begin with one grand never-before-seen idea that will change the way we live forever.

While that is true, what is also true is that at the core of entrepreneurship is solving problems and the easiest way to discover a problem, is to take stock of your own personal problems. If something is a problem to you, then there is a high possibility that many others out there have the same problem.

Our #BellaNaijaMCM this week Shola Ladoja started what is his business today, by trying to solve a problem him and a few friends were faced with.

Shola, who had planned to retire as a farmer didn’t know he will start his career in farming this early.

The engineer who had worked in three different places after his studies at the New York Institute of Technology graduate moved to Nigeria to continue his engineering career.

But there was a problem. Shola drank green juice almost everyday in New York, but could not find any when he moved back to Nigeria. He decided to start producing green juice for himself and people like him who like it.

He left his job at one of Nigeria’s biggest power distribution companies to focus on agriculture. In May 2014, he began his company Simply Green Limited producers of Simply Green Juices.

Simply Green Limited is a farm to bottle raw cold-pressed juice company with a high percentage of produce coming from its farms.

“With a focus to stop the importation of most vegetables and produce that can be easily grown by mixing organic and technically-advanced farming practices, Simply Green Limited understands the importance of high quality and well-packaged produces especially vegetables and herbs.”

Shola is also the Managing Director of Real Livestock Limited, a company which focuses on the commercial cultivation of grains and meat production.

Raw materials for the production of Simply Green Juices are sourced locally (from the company’s farms and partner farms), according to Shola and his companies are giving back to the communities where their farms are located by allowing indigenes use their land for cultivation for free.

Agriculture built the Nigeria we see today, and it has the potential to build the Nigeria of our dreams but we must get involved and harness this potential and Shola is doing just that.