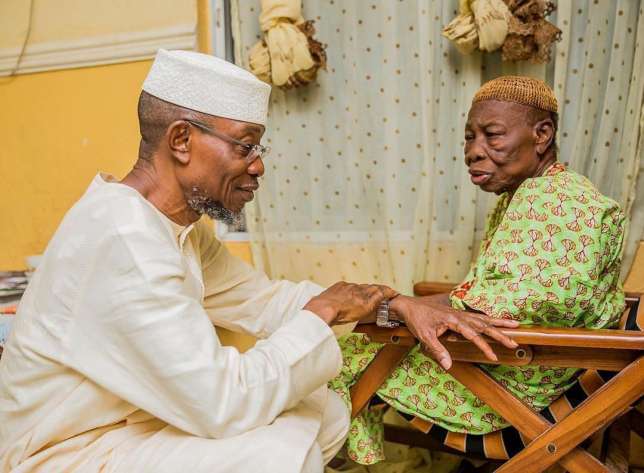 Alhaja Saratu Aregbesola, the mother of Gov. Rauf Aregbesola of Osun is dead.

The News Agency of Nigeria (NAN) reports that the octogenarian died in the early hours of Tuesday in Ilesa, the governor’s hometown.

Although no statement had been issued on the burial arrangement, sources close to the family said the deceased would be buried later in the evening according to Islamic rites.

The All Progressives Congress (APC) in Osun, however, had already condoled with the governor over the death. The APC Chairman in the state, Mr Gboyega Famodun, said in a condolence message in Osogbo that the deceased lived a fulfilled life:

As we mourn this natural event of the octogenarian, we also have cause to be grateful to Allah for the life of this great woman. She had the unique grace of giving birth to a child that has become a jewel not only to the people of Osun and Yoruba land in particular, but also Nigeria generally. On behalf of the good people of Osun and the numerous supporters of the APC in the state and beyond, we extend our sympathy to our beloved governor and his family for the loss of Alhaja Saratu.

The Peoples Democratic Party (PDP) in the state, on its part, described the death of the governor’s mother as painful. The party, in a condolence message signed by its Chairman, Mr Soji Adagunodo, said the deceased was an industrious, virtuous and religious woman. Adagunodo said the demise of “Mama Olobi” was not only a loss to her family but also to the entire state. “May Allah grant the deceased eternal rest and the family the strength to bear the loss,’’ it said.

The Osun House of Assembly also commiserated with the governor over the demise of his mother. A statement signed by Mr Olatunbosun Oyintiloye, the House Committee Chairman on Information and Strategy, described Aregbesola’s mother as charitable and benevolent, adding that she would be greatly missed:

Mama Olobi was a mother in a million who cared for every one that came in contact with her. She was a very cool, calm and collected personality and a successful woman in kolanut business. The Assembly prays God to grant Alhaja Saratur Al-Janat Firdaus.