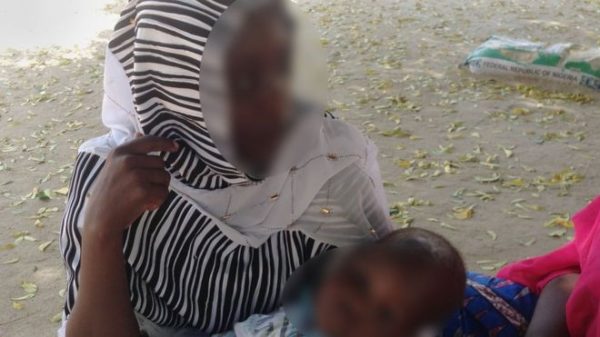 Aisha with her 2-year-old son

Adaobi Tricia Nwaubani in an article for BBC has recounted stories of women rescued while in captivity of Islamic Sect Boko Haram, but have of their own will returned to them.

After the release of 82 Chibok Girls by Boko Haram earlier in May, news had filtered through claiming some had refused to return.

Although the news was dismissed by some, claiming the girls were coerced, the return of already rescued women to their abductors sheds a new light.

Aisha, a 25-year-old woman was abducted from her home in Maiduguri 4 years ago.

According to her, while in captivity, she was married to a Boko Haram commander, who showered her with gifts and put her in charge of other women in the Boko Haram camp.

She was rescued by the Nigerian Military in 2016 while her husband had gone off to battle someplace else.

She spoke with Nwaubani while undergoing a de-radicalization program in government custody, where she had been for about 8 months. She said:

I now see that all the things Boko Haram told us were lies. Now, when I listen to them on the radio, I laugh.

She reminisced about the number of slaves she had while in camp, and the respect she received from other Boko Haram commanders.

She had a strong influence on her husband, she said, and even accompanied him to battle once.

She reportedly returned home, where she began earning money from buying and selling fabric, attending social events and posting photos of herself on social media.

She had a string of suitors, her mother Ashe said. “At least five different men wanted to marry her. One of the men lives in Lagos. She was thinking of marrying him.”

While Aisha was enjoying her time back, other rescued women began to return to their Boko Haram husbands, Ashe said.

She personally knew at least 7 women who returned, she said, all of them friends of her daughter. She said:

Each time one of them disappeared, her family came to our house to ask Aisha if she had heard from their daughter. That’s how I knew.

The girls reportedly kept in touch with Aisha through phone calls. Aisha’s younger sister, Bintu, listened in on a few of those phone calls. Ashe said:

They told her to come and join them but she refused. She told them she didn’t want to go back.

But after Aisha received a phone call from one of the girls, telling her that her husband had taken another wife in camp, one to whom she was a rival, Aisha became despondent.

“She stopped going out or talking or eating,” Bintu said. “She was always sad.”

Two weeks later, Aisha left home with her belongings, the 2-year-old son she had with the commander, switched off her mobile phone, and disappeared.

She hasn’t been heard from since then.

Asta, another “Boko Haram wife” Nwaubani spoke to, said she had heard of other women returning, but she had no plans to do so herself.

The 19-year-old did say she terribly misses her husband, and is keen to hear form him again, be reunited with him.

“I will tell him to come and stay here with us and live a normal life,” she said, insisting she would not return to the forest if he asked her.

Go! Get the Results