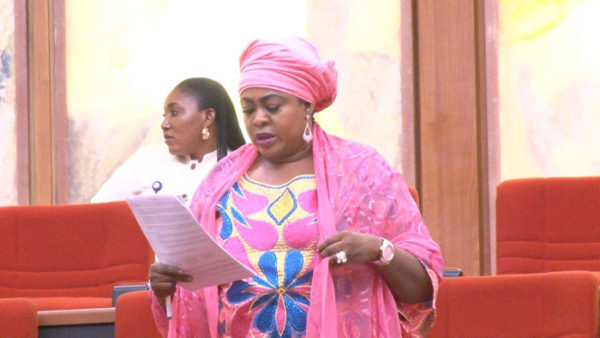 As agitations for the restructuring of the country gather momentum, a senator has thrown her weight behind the call, saying it is inevitable.

Senator Stella Oduah (PDP-Anambra North) said no meaningful development can be achieved unless the current political structure was modified to also guarantee social justice, equity and fairness for all Nigerians across the six geo-political zones.

“We cannot go further than we have gone without restructuring for obvious reasons.

“For us from the South-East in particular, you cannot spank a child and at the same time forbid the child from crying. It is an abnormality.

“The National Assembly has been discussing it that this nation was built on the platform of fairness, justice and equity.

“That is what our Constitution is all about and so if a group says they have concerns, those concerns must be addressed,” she said at the News Agency of Nigeria (NAN) Forum in Abuja.

Oduah had served under President Goodluck Jonathan-led administration until 2015 as Minister of Aviation.

NAN reports that Jonathan, in the wake of agitations for restructuring, had on March 17, 2014, inaugurated a National Conference which had 492 delegates.

Receiving the report from the Conference Chairman, retired Chief Justice Idris Kutigi, on August 21, Jonathan’s government had promised that the outcome of the conference would be “utilized to settle the nation’s myriad of problems.”

“The deliberations of the conference will be utilized to settle the nation’s problems,” said Vice-President Namadi Sambo at a dinner for the delegates. The report was however, not implemented.

But Oduah said restructuring which the government at the time failed to carry out was the way forward.

“The issue is how you address the agitation to the extent that the expected yield which is fairness, justice and respect as opposed to disrespect is achieved. How to do that is through a dialogue; we must all bring to the table,’’ she said.

On the nature of restructuring required to bring an end to the rising agitations, the lawmaker suggested a holistic approach which would restructure political, economic and educational sectors as well as the security apparatus.

“The restructuring I am clamouring for is a holistic one to the extent that I am first a Nigerian and then the locality where I come from by accident of birth becomes secondary.

“The primary thing is that I am a Nigerian and I have to have a sense of belonging.

“The details of restructuring have to be discussed and it must be holistic because you cannot do partial restructuring for a better country.

“Women as a gender must be priority in the restructuring because women make up about 60 per cent of the country’s population.

“You can imagine the level of development the country will have if it actively involves 60 per cent of its strength in governance.

“The youth and their welfare must also be prioritized. So, it has to be very holistic,’’ she stressed.

According to Oduah, the recommendations of the 2014 National Conference were “robust enough” to set the platform for a holistic restructuring of the country.

Oduah, who said she had gone through the content of the report, noted that it touched on almost all the concerns of Nigerians from the different regions.

She senator added: “I believe that the delegates at the confab must have spent enormous amount of time, efforts and resources. So, we need to look at it and address the issues agitating our minds.’’

The former minister promised that the 8th Senate would play a major role in helping to restructure the economy and the country.

“The Senate, having requested for the report before proceeding on recess, will ensure that it is submitted while necessary action will be taken,” she said.

Related Topics:RestructuringStella Oduah
Up Next

We are rooting for You!