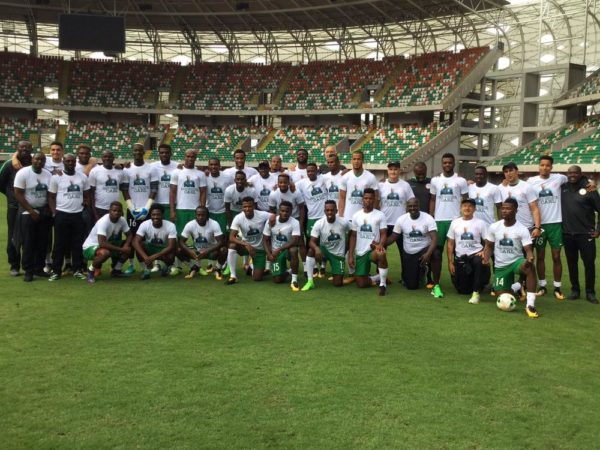 Nigeria’s Super Eagles on Friday remain Group B leaders in the 2018 FIFA World Cup Qualifiers after whipping the Indomitable Lions of Cameroon 4-0 at the Godswill Akpabio Stadium in Uyo.

After a tentative beginning, which saw both sides being cautious, the hosts moved into high gear after 15 minutes and were almost opening scores in the 19th minute.

In the 24th minute, Victor Moses had a free kick goal ruled offside, five minutes after he had miscued his shot following a Mikel Obi pass.

After Moses sent a 27th minute header over the bar, the Eagles got on the scoresheet two minutes later through Odion Ighalo.

He shrugged off a defender to run onto a pass, turn another defender to the left before sending a low shot with his left into the corner of the net.

The Eagles did not remove their feet from the throttle and were duly rewarded in the 43rd minute when Mikel Obi side-footed past goalkeeper Fabrice Ondoa.

A Moses corner kick from the left side had caught the Cameroonian defense ball-watching, and the Nigeria captain slid past to push the ball in.

Cameroon’s fightback in the second half was feeble in the face of the commanding Nigerian defense line which had Leon Balogun all over and William Troost-Ekong stifling the opponents play.

With goalkeeper Ikechukwu Ezenwa putting up a superb performance, the Super Eagles were confident to hunt for more goals.

A flowing move from a counter-attack, set off by Troost-Ekong, saw Obi sending on Moses in the 55th minute.

The Chelsea wing forward drew out the Indomitable Lions central defenders before putting on Shehu Abdullahi who cut back for a running Moses to score with a composed finish.

With Cameroon looking deflated, the Eagles had more time to add another goal, through substitute Kelechi Iheanacho.

The Leicester City forward stooped to head home an Ogenyi Onazi low cross after the Eagles had sent some confusion into the Cameroon defense.

The win means the Eagles now have nine points from three matches, leading the four-team group with seven points.

They visit Cameroon on Monday, with a draw putting them in position to start preparing for the 2018 World Cup finals.

Below is the group’s table: