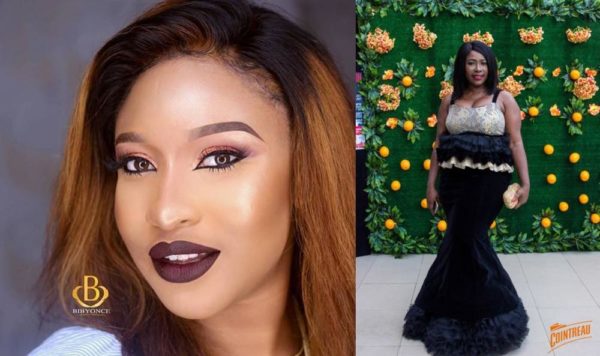 Nollywood actress Tonto Dikeh has lashed out at journalist Azuka Ogujiuba for comments she made about her on show “Hot Topics.”

Azuka had on the show said Tonto Dikeh lied about being abused by her ex-husband Olakunle Churchill.

She had said she had video evidence to back up her claims, which she arrived at after meeting with both Tonto and her ex-husband at different times.

However, Tonto Dikeh on her Instagram on Wednesday said Azuka’s claims aren’t true.

She claimed Azuka was offered a lot of money to manipulate what she said, and she was indeed abused.

She posted a series of photos of her Instagram detailing what really happened, including screenshots of chats she had with Azuka, with the caption:

Firstly Azuka You lured me into this interview. You used someone I respect a lot to convince me to talk about the marriage incidences. I finally succumbed to it because I felt that my story would help other women who faced the same issue of domestic violence. It was never orchestrated as u say. – Secondly, One of your staff suggested that I cover the scar on my leg. I told you that i was okay with the scar showing because it came as a result of domestic violence. – Furthermore, Azuka I told you several times about my faults in the whole incidence. I never hid any of it. I told you I broke things in his house as a response to the violence I faced. So why would you try and use that against me as if I did not openly admit and repent about it. As a matter of fact I have attached the text messages between us! Try and deny!
– Azuka you said yourself that Churchill offered you money to manipulate everything I said. Your assistant also admitted that Churchill offered her a large sum of money to manipulate the whole thing. You mentioned this in front of every body there! Your staff, your camera men, the make up staff, my team members and my brother. Don’t dare deny this! I have several KEY people who where present there. – Azuka you said that Churchill showed you a video of me destroying things. Azuka please release that video! Release everything that was captured on that cctv camera from the beginning of the fight to the end of it without a second or minute missing! Please do this and vindicate your artist since we know now that you manage him.
– Azuka how dare you even say I lied! Where you there!? Where you present in any of the incidences that occurred!? Did you ever speak to any of my family that naturally would have taken sides with me just as his took sides with him. – When you called me for a second interview to counter his own interview what did I tell you? I said NO. That this is not a fight I want to entertain most especially because of my son. – Isn’t it funny that your boyfriend you sent to pick me from the airport is now flying around the country with Churchill! Coincidence? – You said that you went to Ghana for an event and decided to do a bit of 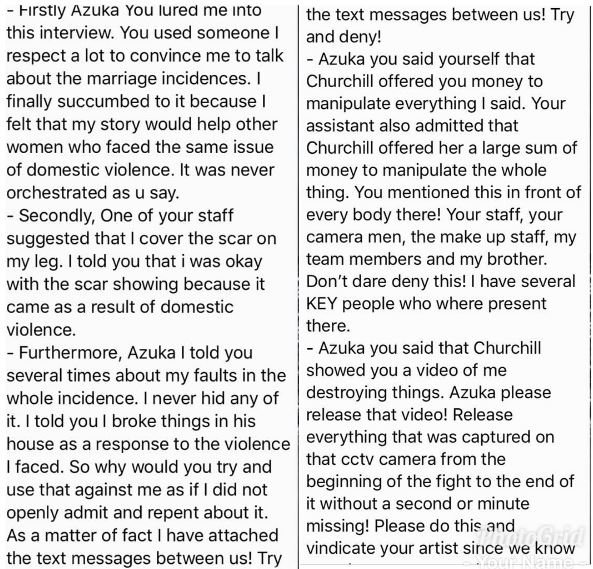 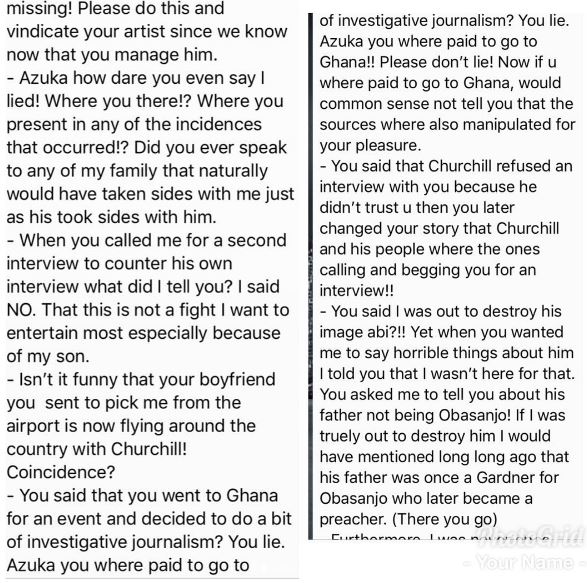 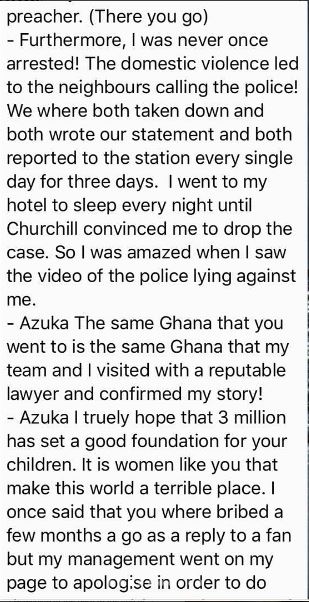 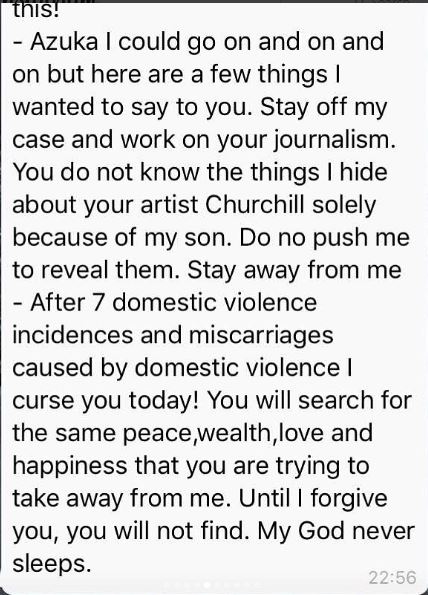 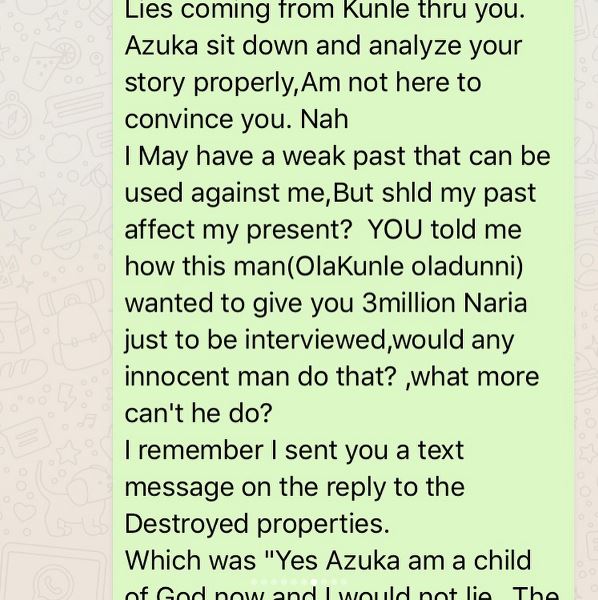 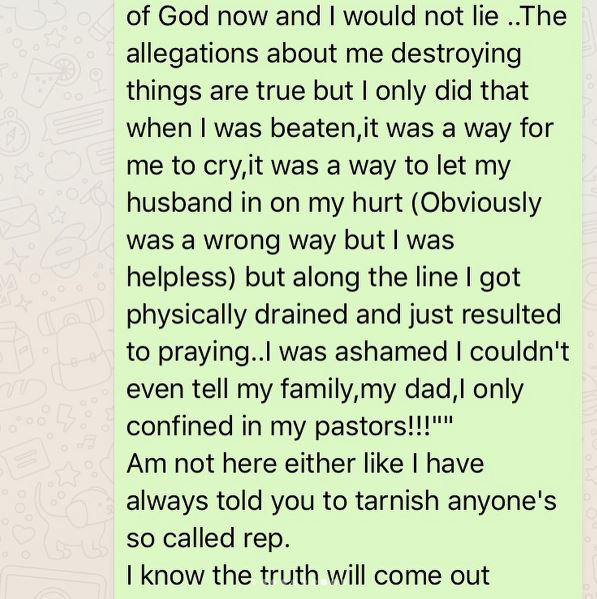 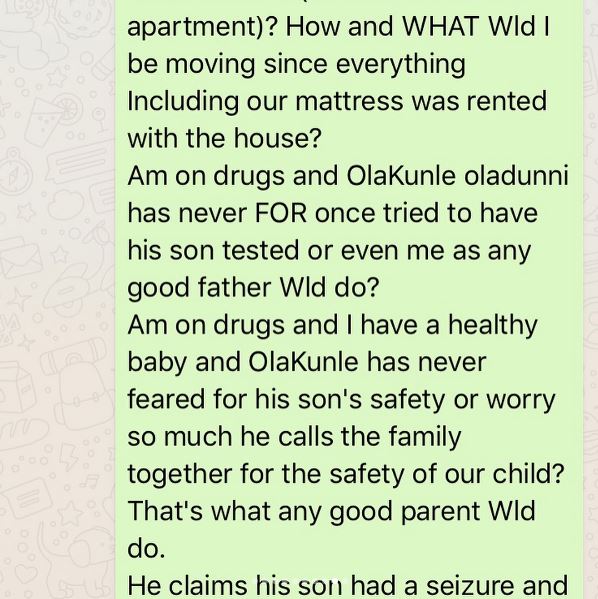 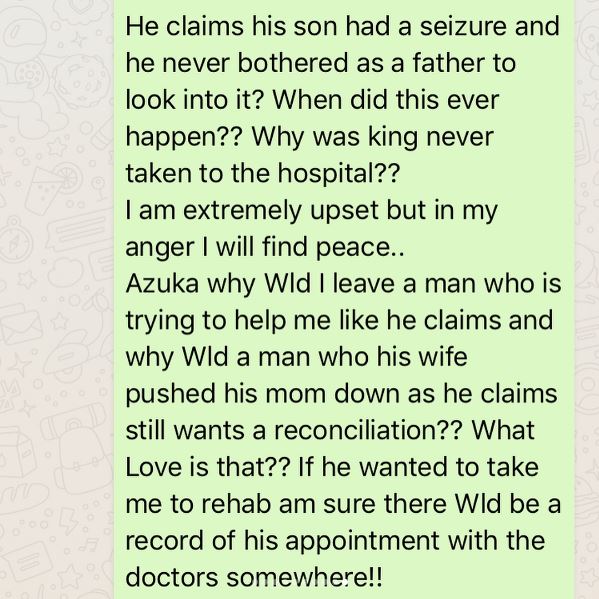