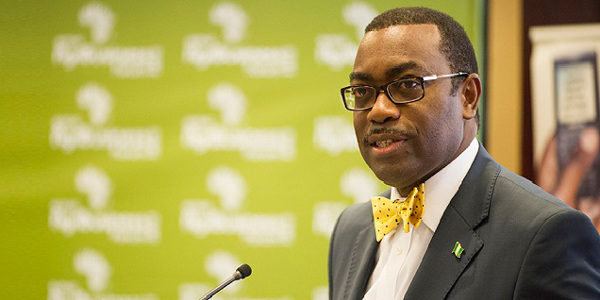 Akinwumi Adesina, the 2017 recipient of the World Food Prize, has described his win as a motivation to continue to feed the African continent.

Adesina, President of African Development Bank (AfDB) and former Minister of Agriculture under the Jonathan led administration, was honoured with the World Food Prize (known as the Nobel Prize for Agriculture) for what was described as his “life mission to lift up millions of people out of poverty.”

Speaking at a press conference ahead of the World Food Prize ceremony, Akinwumi Adesina stressed the need to put technology and information in the hands of farmers. He said:

For me, the World Food Prize is a great honour and recognition for all of the work that I have done for decades of my life. But it also puts wind behind our sail as we now take off to feed Africa, because it is a job that has to be complete.

With it, they will find out information about the market, about weather, and about to access finance.

They will be able to get information about nutrition for mothers, for instance. That is very important.

That was why when I was Minister of Agriculture in Nigeria, we launched this electronic wallet system that allows farmers to access fertilizers, and we reached well over 15 million farmers.

In June, the World Food Prize announced African Development Bank President Akinwumi A. Adesina as the 2017 Laureate for his work in improving the availability of seed, fertilizer and financing for African farmers, and for laying the foundation for the youth in Africa to engage in agriculture as a profitable business.

The World Food Prize was founded by Nobel Peace Prize-winner Norman Borlaug and is considered the foremost international honour recognizing the achievements of individuals who have advanced human development by improving the quality, quantity or availability of food in the world.

The Prize is presented each October on or around UN World Food Day (October 16) in a ceremony in the Iowa State capital of Des Moines.

Under President Adesina’s leadership, the AfDB is accelerating agricultural development through its Feed Africa Strategy with planned investment of $24 billion over the next 10 years.

The prize also recognizes Adesina’s work over the past two decades with the Rockefeller Foundation, at the Alliance for a Green Revolution in Africa (AGRA), and as Nigeria’s Minister of Agriculture and Rural Development.